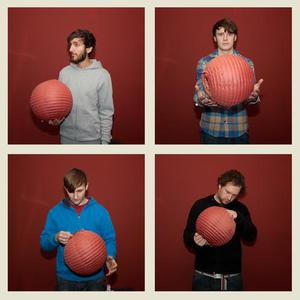 Maybeshewill are an Instrumental band based in Leicestershire, UK where they were formed in 2005. They are James Collins (drums), Matt Daly (keyboards) John Helps (guitar), Robin Southby (guitar) and Jamie Ward (bass). They've worked tirelessly over the last five years through endless touring and three full-length albums to build a loyal and enthusiastic following across the world. Sticking to steadfastly DIY ethics, the band have self recorded all their material to date and aspire to be as self sufficient as possible.

The band released their debut four-track EP entitled ?Japanese Spy Transcript? on their own label, Robot Needs Home Records in early 2006 which was later picked up by Japan's XTAL Recordings (Caspian, Yndi Halda) and released in an extend form in August of the same year.

Nottingham's Field Records released the bands self-recorded debut album ?Not For Want Of Trying? in May 2008. The record was Huw Stephen's album of the week on his radio 1 show in its week of release and received glowing reviews from RockSound (8/10), Kerrang (4/5) and Drowned In Sound (8/10), amongst many others. After touring the release extensively around the UK with friends Fight Fire With Water, Worriedaboutsatan and And So I Watch You From Afar, they quickly began working on their second fell-length.

A year later, in June 2009, ?Sing The Word Hope In Four-Part Harmony? was released, once again through Field Records. Inspired by six months of heavy touring, the record was written to be performed live with a louder, rougher sound. Reviews were as enthusiastic once again, and the touring schedule ever more hectic with the band venturing as far afield as Japan and Russia and mainland Europe to promote the release.

After an extended period of quiet in 2010, the band released their first new material for over a year in the form of 7? single ?To The Skies From A Hillside? and set about a near sell-out headline tour of the UK, Europe and Russia in support of the record ? culminating in a massive home-coming show at Leicester's Y-Theatre.

Shortly after returning home the band announced that they would be parting ways (amicably) with Field Records, moving on to join the Function Records roster (Meet Me In St. Louis, Cats and Cats and Cats, Shield Your Eyes). Having released the single ?Critical Distance? on 7? in March 2011, their third studio album ?I was here for a moment, then I was gone? was released in the UK, Europe and Japan in June.

Approaching the record as if they were recording their first album, it saw the band move to using studio spaces for the first time, though still keeping the engineering in-house with Jamie taking the production reins. The album received wide-spread critical acclaim across the board, including Kerrang (4/5), RockSound (8/10), Big Cheese (4/5), NME (7/10) and Artrocker (4/5). In an unprecidented turn up for the books the album was played back to back in it's entirety on Kerrang Radio in it's week or release and gained the band ?Band of the Week' accolade on RockSound's website for two weeks running.

Over the past five years the band have toured or played with friends and acquaintances including A Silver Mt. Zion, And So I Watch You From Afar, Cats And Cats And Cats, earthtone9, Envy, Foals, God Is an Astronaut, Humanfly, Johnny Truant, LITE, Long Distance Calling, Mojo Fury, The Ocean, This Will Destroy You, Worriedaboutsatan, You Slut! and &U&I.

The band have described their sound as "instrumental rock with electronics", while Drowned In Sound described them as sounding "like Mogwai would if the latter had ever found love in an arthouse cinema. And then were beaten around the head with a keyboard".

No Feeling Is Final

Live At The Y Theatre

I Was Here For A Moment, Then I Was Gone