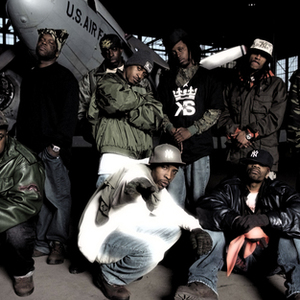 Boot Camp Clik is a hip-hop group from Brooklyn, New York. The group consists of Buckshot (of Black Moon), Smif-n-Wessun (Tek and Steele, a.k.a. Cocoa Brovaz), Heltah Skeltah (Sean Price (a.k.a. Ruck) and Rockness) and O.G.C. (Starang Wondah, Top Dog and Louieville Sluggah). 1992 to 1996 Black Moon was the first to record, debuting in 1992 with their underground hit single "Who Got Da Props?". Their debut album Enta Da Stage followed in late 1993, featuring production from DJ Evil Dee and Mr.

These four albums are now hailed by many as 1990s Hip-Hop classics.

In 1997, the whole Camp came together for their first group album For the People. They abandoned their Beatminerz production crew and left behind their signature, grimy, sample-heavy basement sound, instead choosing to rap over beats with live instrumentation. The album received lukewarm reviews and mediocre sales. Their work over the next two years was met with declining sales and interest. Smif-N-Wessun [Now the Cocoa Brovaz due to a lawsuit with Smith & Wesson firearms] were the first to return, with 1998's The Rude Awakening, which, compared to the other albums soon to come, did pretty well critically and commercially. Heltah Skeltah met some harsh reviews for their 1998 second album Magnum Force, accused of abandoning their grimy street work for a more commercial sound. Despite a hit single, "I Ain't Havin' That", they weren't producing the sales they hoped for, and soon split up. Black Moon returned, after a lengthy legal battle over their name, in early 1999 with War Zone. The album did pretty well critically, but couldn't match the sales of their debut. O.G.C.'s 1999 second album The M-Pire Shrikez Back almost completely missed the radar commercially, but received mostly good reviews. 1999 also saw the debut album from Boot Camp affiliates Representativz, with "Angels of Death", and a Duck Down Records compilation Duck Down Presents: The Album.

The Camp was largely missing from the Hip-Hop scene between 2000 and 2001, besides a Boot Camp Greatest Hits compilation titled Basic Training: Boot Camp Clik's Greatest Hits in 2000. The Camp (minus Heltah Skeltah's Rock) returned with another group album in 2002, titled The Chosen Few, their first on an independent label. Sales were pretty strong for an independent album, reaching around 60,000. The album received a 4 1/2 star rating from All Music, as well as other strong reviews from Hip Hop magazines. In early 2003, Duck Down Records released a compilation album entitled Collect Dis Edition, featuring a number of singles released during their MIA period. Black Moon returned in 2003 with Total Eclipse. The album was very well received, and featured the underground anthem "Stay Real". In 2005, Duck Down released their "Triple Threat" campaign, featuring the solo debut from Sean Price, Monkey Barz, a collaboration between Buckshot and Little Brother's 9th Wonder, Chemistry, and a new album from Smif-N-Wessun, Tek N Steele: Reloaded. In early 2006, Duck Down released a DVD titled Video Surveillance, featuring over thirty of the Camp's music videos. In July 2006, the Camp released their third group album, entitled The Last Stand, featuring the return of Heltah Skeltah. The first track and music video released from the project was "Trading Places", which was also featured as the B-Side to the first official single "Yeah". On January 30, 2007, Sean Price will release his second solo album, titled Jesus Price Supastar.

Still For The People