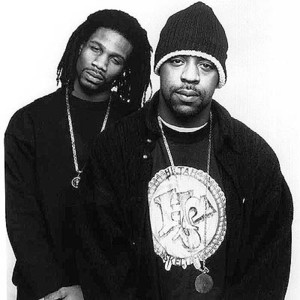 Heltah Skeltah is a Hip Hop duo consisting of members Rock aka Da Rockness Monstah and Ruck aka Sean Price. The two are members of Brooklyn hip hop supergroup Boot Camp Clik, along with Black Moon, Smif-n-Wessun, and O.G.C.. Heltah Skeltah was formed in 1995. Heltah Skeltah first appeared on Smif-N-Wessun's album Dah Shinin' in 1995, appearing on the tracks "Wontime (LP Version)", "Cession At Da Doghillee (LP Version)" and "Let's Git it on".

Heltah Skeltah first appeared on Smif-N-Wessun's album Dah Shinin' in 1995, appearing on the tracks "Wontime (LP Version)", "Cession At Da Doghillee (LP Version)" and "Let's Git it on". Later in 1995, they grouped up with fellow Boot Camp members O.G.C. to form The Fab 5 (another nod to The Beatles), and released a surprise hit single, "Leflaur Leflah Eshkoshka". Out of The Fab 5 members, Rock and Ruck received the most amount of attention, due to their notable charisma and chemistry. The duo released their anticipated debut Nocturnal in June 1996, which included "Leflah", as well as the singles "Operation lock down" and "Therapy". The album sold over 250,000 copies in the United States, and has become a classic in the underground hip hop scene because of its grimy, basement sound and strong lyrics.

The duo released a group album with the Boot Camp Clik in 1997, then followed in 1998 with their second effort Magnum Force. The album's lead single, "I Ain't Havin' That" (sampled from the A Tribe Called Quest track "Hot Sex"), became a Hot 100 hit. Despite the single's success, most critics slammed the album due to its lighter content. Ruck and Rock seemed disillusioned with their lack of sales, and split in 2000. Rock began having problems with Duck Down Records, and split with the label, signing to DJ Lethal's Lethal Records. He planned to release an album titled Planet Rock, but the label folded and the album disappeared. Sean Price stuck with the Boot Camp for their second group effort The Chosen Few in 2002.

Heltah Skeltah reunited in 2005, making appearances on Sean Price's solo album Monkey Barz and Smif-N-Wessun's Reloaded album. The duo continued work with the Boot Camp for their third group effort The Last Stand, released in July 2006. According to both members, they are also currently working on another Heltah Skeltah album, tentatively titled D.I.R.T., an acronym for Da Incredible Rap Team. Rock is also planning to release his solo debut, tentatively titled Monstah Music, sometime in 2007. In 2007, Heltah Skeltah will appear on Chinga Chang Records March 5th Release The "Official Joints" compilation, a collection of previously unreleased songs by NYC rappers.