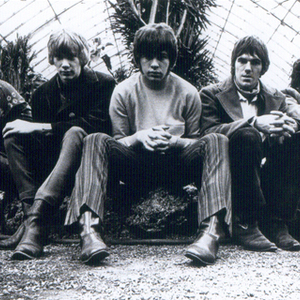 The Blues Magoos was a rock music group from the Bronx, New York. They were at the forefront of the psychedelic music trend, beginning as early as 1966 1964 - 1971 The band was formed in 1964 as "The Trenchcoats". The original members were Emil "Peppy" Thielhelm aka Peppy Castro (vocals and guitar), Dennis LePore (lead guitar), Ralph Scala (organ and vocals), Ronnie Gilbert (bass) and John Finnegan (drums). The band made a name for itself in various clubs in Greenwich Village.

1964 - 1971
The band was formed in 1964 as "The Trenchcoats". The original members were Emil "Peppy" Thielhelm aka Peppy Castro (vocals and guitar), Dennis LePore (lead guitar), Ralph Scala (organ and vocals), Ronnie Gilbert (bass) and John Finnegan (drums). The band made a name for itself in various clubs in Greenwich Village. By 1966 the band had changed its name to fit in with the psychedelic vibe of the times - they first changed their name to the Bloos Magoos, though they changed that to the more conventional Blues Magoos. They also made some line-up changes, bringing in Mike Esposito as lead guitarist, and Geoff Daking as drummer.
Like their name, the group's sound was of the psychedelic variety. They released the "I'm Wrong and You Are Right" b/w "The People Had No Faces" single on Verve Records, but did not gain the band much recognition. However, Mercury Records signed the band to a record deal in late 1966 and the group's debut album, Psychedelic Lollipop was released shortly thereafter. It was one of the first records to contain the word "Psychedelic" on the sleeve (along with the 13th Floor Elevators' first album, The Psychedelic Sounds of the 13th Floor Elevators, and The Deep's Psychedelic Moods, both also from 1966). They played a lot then at the Chess Mate Coffeehouse owned by Morrie Widenbaum, a mostly folk venue that also hosted bands like Southbound Freeway, Siegel-Schwall Blues Band and Blues Magoos.
In a tour of the US in 1967 they were the opening act followed by The Who and then the headliners Herman's Hermits. The group's biggest song, "(We Ain't Got) Nothin' Yet", whose Vox Continental organ riff bears an uncanny resemblance to the 1962 hit by Ricky Nelson, "Summertime" (Deep Purple also used this riff in their hit "Black Night") , was released as a single in 1967 (albeit from their 1966 album), with "Gotta Get Away" as the b-side. The song hit number 5 on the US charts, although it did not fare nearly as well in the UK. It was used for the movie Easy Rider in 1968. Incidentally, The Magoos' "(We Ain't Got) Nothin' Yet" was released as a single in February 1967 by British group The Spectres (later to become The Status Quo). The record did not chart.
The next single by the Blues Magoos, "There's A Chance We Can Make It," was only a minor hit, with its b-side "Pipe Dream" actually charting higher (though neither side hit the top 40). After one more minor chart single with "One By One," subsequent singles were largely ignored by record buyers. Neither of the two albums released after Psychedelic Lollipop, Electric Comic Book and Basic Blues Magoos, had much success. By 1968, the band was discouraged and they split up.
The group's management had other plans. The band was signed to ABC Records, but most of the members did not go along with this plan. Only Castro agreed and started up a revamped Blues Magoos, with Eric Kaz, Richie Dickon, John Leillo and Roger Eaton. The other Blues Magoos moved to the west coast, enlisted Joey Stec, formerly of The Millenium, and released the "Let Your Love Ride" b/w "Who Do You Love" single on Ganim Records in 1969 before eventually going their separate ways. Ralph Scala and Joey Stec later resurfaced as a member of The Dependables. In 1969, the Castro-led band completed Never Goin' Back To Georgia, but that release did not attract public attention either. Eaton left the band, and the other Blues Magoos used session musicians for the follow up Gulf Coast Bound. It did poorly as well and though the Magoos struggled for another two years, they eventually parted ways.

1972 - present
After a stint with the rock musical Hair, Peppy Castro formed Barnaby Bye with fellow cast members Bobby and Billy Alessi.[1] The group released two albums on Atlantic records, "Room to Grow" (1972) and "Touch" (1973).[2] In 1981, Castro resurfaced again with the group Balance whose song "Breaking Away" reached #22 on the Billboard Hot 100 chart. In July 2008, the Blues Magoos with original members Ralph Scala, Castro and Geoff Daking reunited for the first time in years for two concerts, including one with The Zombies at the Fillmore New York at Irving Plaza in New York City.[3] In December 2009 they traveled to Spain for the Purple Weekend festival.[4]

Kaleidescopic Compendium (The Best Of The Blues Magoos)

Never Goin' Back To Georgia