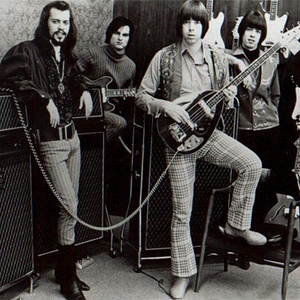 The Seeds were a 1960s rock and roll band based in Los Angeles, California, United States, whose raw and abrasive energy, and simple, repetitive lyrics came to exemplify the garage rock style. The band was active from 1965 to 1972. The group reunited in 1989, split again in 1993 and reunited once more in 2003. The band's future is in question after the June 2009 death of its only constant member, singer Sky Saxon.

Lead singer Sky Saxon was heavily influenced in style and appearance by Mick Jagger, and the group promoted the fact that Blues great Muddy Waters once called them "America's own Rolling Stones." Keyboardist Daryl Hooper was a major factor in the band's sound; the band was one of the first to utilize keyboard bass; guitarist Jan Savage and drummer Rick Andridge completed the original quartet. Vocalist Saxon also played bass guitar.

The Seeds' first single, "Can't Seem To Make You Mine," was a regional hit in southern California in 1965. The band had their only national top-40 hit, "Pushin' Too Hard", in 1966. Two subsequent singles, "Mr. Farmer," (also 1966) and "A Thousand Shadows" (1968) achieved more modest success. Though musically primitive, one album was devoted to the Blues (with liner notes by Muddy Waters), and another (Future, 1967) was full-blown psychedelic rock, with ornate flower-themed graphics to match. The original Seeds disbanded in 1970, shortly after the release of Raw and Alive at Merlin's Music Box.

Sky Saxon joined the Yahowa religious sect, inspired by their divine leader Father Yod, released several albums as the Yahowa 13 in the mid-70s. Members of the sect went their separate ways after Father Yod died in a hang gliding accident in 1974, although Saxon continues to collaborate with various members of the Yahowa to this day.

In the 1980s, Saxon collaborated with several bands?including Redd Kross and The Chesterfield Kings?before reforming the original Seeds in 1989 to headline "The Summer of Love Tour", along with Big Brother and the Holding Company, Arthur Lee and Love, The Music Machine and The Strawberry Alarm Clock. The Seeds remained dormant again until 2003, when Saxon reformed them with original guitarist Jan Savage and newcomer Rick Collins on bass. This new version of the Seeds has gone through several incarnations, with Savage departing mid way through their 2003 European tour due to his health. Saxon now remains the only original member of The Seeds, currently augmented by the aforementioned Collins as well as organist Ryan Maynes, guitarist Nate Greely, and drummer Justin Smith. The band continues to frequently tour Europe and the United States.

Justice For the Earth

Travel With Your Mind

A Full Spoon Of Seedy Blues

A Web Of Sound