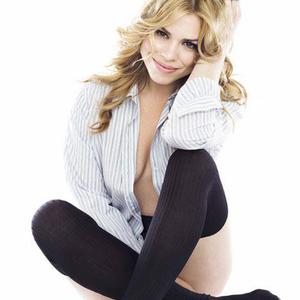 Billie Paul Piper (born Leanne Paul Piper on 22 September 1982) is an English actress. She began her career as a pop singer in her teens, but is now best known for portraying Rose Tyler, companion to the Doctor in the television series Doctor Who until mid 2008. Her role in Doctor Who has made her a household name in the United Kingdom. Piper's first break in the entertainment world came as a teenager, when she was selected to appear on the Saturday morning kids' television show Scratchy & Co. Piper later landed a role in a television commercial promoting the pop magazine Smash Hits.

Piper's first break in the entertainment world came as a teenager, when she was selected to appear on the Saturday morning kids' television show Scratchy & Co. Piper later landed a role in a television commercial promoting the pop magazine Smash Hits. Her role was to run up to the camera, blow a bubblegum bubble and shout "Pop!" Soon after she was offered a record deal at the age of fifteen, and in 1998 became the youngest artist ever to debut at number one in the UK singles chart with "Because We Want To", released under the artist name "Billie". Her follow-up single "Girlfriend" also debuted at Number One, and her first album, Honey to the B (released immediately afterwards) debuted at Number 14 in the UK album charts. She released two further singles off the album, "She Wants You" and "Honey to the Bee"; both songs debuted at Number 3.

Piper then took a year off to record her second album. She decided to release further records under her full name, Billie Piper. She returned to the Singles Chart in May 2000 with a new, sexier sound. She hit the Number 1 spot with "Day & Night", but her success wasn't to continue. She waited until the following September to release "Something Deep Inside". That reached Number 4 in the UK Singles Chart. In October 2000, Piper released her second album, Walk of Life, which reached Number 14 in the UK Album Chart. The song "Walk of Life", the final single off this album, was released in December 2000 and reached Number 25 in the UK Singles Chart. This proved to be Piper's last musical release, a low-key exit from the world of pop.

In 1999, Piper was nominated for two Brit Awards and was named Best Female Star at the Smash Hits Poll Winners' party, although at the latter ceremony she was reduced to tears after being viciously booed by jealous fans of Ritchie Neville, member of boyband Five, whom she was dating at the time.

Honey To The B