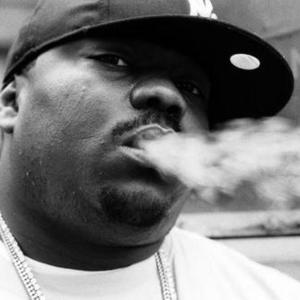 Beanie Sigel (born Dwight Grant on March 6th, 1974) is an African-American rapper from Philadelphia, Pennsylvania, signed to Damon Dash and Jay-Z's Roc-A-Fella Records in 1998. Beanie Sigel's name derives from the street in Philadelphia where he was raised, "Sigel Street," and "Beans" is what people used to call him as a child. Beanie also founded the group and label State Property as well as the clothing company.

Beanie Sigel's name derives from the street in Philadelphia where he was raised, "Sigel Street," and "Beans" is what people used to call him as a child. Beanie also founded the group and label State Property as well as the clothing company.

Sigel's debut LP, The Truth, was released February 28, 2000 on Roc-A-Fella Records. The album received a gold plaque for hits like "The Truth" and "Remember The Days" featuring Eve. His second album The Reason was released in mid-2001. The Reason was lighter material compared to his debut album and introduced the world to his own rap group State Property. Beanie Sigel helped launch the careers of fellow Philly rappers Freeway, Peedi Crakk and the Young Gunz.

Around 2001, Beanie Sigel and Jadakiss of the Ruff Ryders were involved in a beef that stemmed from Jada claiming rappers from Beans' home city of Philly were simply signed because they were a hot fashion among major labels, which to some extent was true at the time. Sigel took offense to this, and they sent several tracks back and forth. Eventually Styles P. (D-Block} and Jay-Z got involved, and Beans even called out DMX, who never responded.

The beef went on even after Russell Simmons, owner at the time of Def Jam (the label which Roc-A-Fella was under and Ruff Ryders was affiliated with through DMX) made the two declare a brief truce and Jay-Z apologized to Jadakiss and bowed out. Disses finally stopped flying after Sigel released a scathing diss track over Jada's "Put Ya Hands Up" beat, recalling when the LOX wore shiny suits in a Bad Boy video, among other things.

The third album The B. Coming was released on March 28, 2005 under Dame Dash Music Group and features production from The Neptunes, Just Blaze, and Bink!, among others, with guest appearances by State Property, Redman, Snoop Dogg and usual suspects Cam'ron and Jay-Z. The album was recorded in the weeks between his sentencing and imprisonment and was released after he was locked up; he was released a few months ago.

While he was in jail, it is said none of the State Property members except for Oschino Vazquez came to visit him. He told Dame to pass the word on that State Property was no longer in effect, until after he was released. When the split between Roc-A-Fella owners occured, Dame made it clear that Beanie's intentions were to move State Property to his new Dame Dash Music Group.

However, all members except for, again, Oschino, chose to go with Jay-Z. When questioned, they claimed they were signed by Jay and never needed State Property or Beanie Sigel to make them popular. When he was released from jail, Beans had a few choice words for his friends, claiming "I still love them like brothers...I just don't know if we can make music again."

It was thought that Beans had chosen to sign with Dame; however, this is unclear, as he was present at Jay-Z's I Declare War concert in 2005, and has said he now has his own State Property Records under Jay-Z's Def Jam.

In September, 2005, a jury acquitted him of charges that he nearly shot to death a man on a crowded city street two years ago. In August, Sigel left federal prison after serving nearly a year on a federal weapons charge that stemmed from a 2002 traffic stop in Philadelphia.

Sigel also has fallen behind in child-support payments. He was briefly jailed in November until he paid $27,000 in child support and $2,000 in fines, but seems to be paying off his debts.

With the case behind him, Sigel now plans to "make music, make movies and work on his clothing line," said his attorney, Fortunato N. Perri Jr. The case was the last in a series of criminal charges against Sigel, who has a long arrest record dating back to his days growing up in South Philadelphia.

On Tuesday, January 10, 2006, Sigel was convicted of assault for a fight in 2003. He agreed with the prosecutor's version of events, and was convicted of misdemeanor simple assault. He was immediately sentenced to two years probation plus $180 in court costs.

The charges stem from an argument between Sigel and a man who said the rapper punched him in both eyes, breaking his left eye socket, during a January 2003 argument outside a Chinese restaurant.

Beanie Sigel is the co-creator of "The Playpen", a new animated series with writer/producers, Brian Ash and Myles Reiff. The show follows the misadventures of a group of hard-headed tykes in a maximum security daycare center called, The State Nursery.

The Roc Boys (With Freeway)

In Beans We Trust