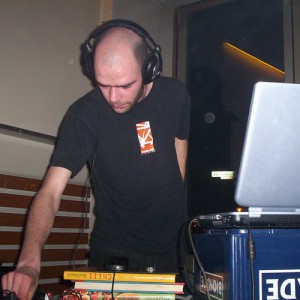 1) Basic is Benny Risher & Shahar Fahima. The duo, both hailing from northern Israel, met at a party a little over two years ago where Shahar was the DJ. They teamed up and started producing together under the name Basic. Benny, born in 1974, started his psy days as early as 1994 while in his twenties. After 4 years of travelling in Goa, India and Thailand, he came back to Israel in 1998 and formed the "Diablo" project together with Avihen Livna (a.k.a Cosma R.I.P ).

Following the release of the "Diablo" album, Benny suffered a serious back injury and didn't write music for a couple of years. In 2003, he produced & released a track under the name Experience X which was a tribute to "Cosma".

Shahar, born in 1982, studied composing and started making music at the age of 16. He experimented with different kinds of sounds and by the time he was 18, started producing psytrance tracks under the name "Spasm".

Both of Basic's drivers, Benny & Shahar come from similar musical backgrounds that include classical music, reggae, rock, and even the blues.

Since starting to produce music as Basic, some of their tracks have been signed and released on various compilations worldwide:

Basic's music is a mix of atmospheric melodies and a very strong bass line and groove. It will fill your mind & soul and fuel your body with maximum beats. In 2007 Basic released their debut album ?Theory of Hype? on BNE/YoYo, gaining them a top-notch international reputation for being highly innovative & creative. A massive world tour followed & also fresh collaborations with the likes of Atomic Pulse, Timelock, Massive & Echotek: atomic pulse - metaluna (basic rmx) Timelock Vs Basic - Time theory Basic VS Massive ? Overdrive Echotek - Back2mind -Basic rmx In addition, the track ?Mind factor' (Basic vs Echotek) was chosen for Christopher Lawrence's ?Live in Moscow' Gatecrasher series. These days Basic are working on 2nd album full of Colaborations & remixes with Top artists

2) BASIC loves his own music.
His inspirations would be ? afrobeat, amon tobin, remus, leisure-b, modern electronics, 60's jazz.
But nevertheless, his own music is preferred.

3) BASIC is an indie rock/jangle pop trio from Austin TX.

4) BASIC is an electro band. The band has had a varied line-up since its beginnings as a duo: still incorporating, developing and utterly ruining collaborative material produced with his former music partner, BASIC founder and multimedia artist David Foley (Formika), central producer Eamonn Creen.

5) BASIC are an electronic duo from Basildon, Essex. Since getting together they have written over 30 tracks and have done covers with their own personal touch. They have played a few venues within the Essex area and are always looking for new venues elsewhere. The idea of a one hit wonder doesn't appeal, Basic are after International success. Also follow us on Twitter : @basicmusic2005 and Facebook : http://www.facebook.com/pages/Basic/112143485474346

Do you know the word

Come As You Are