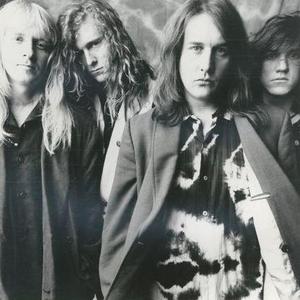 Drivin' N' Cryin' is a hard rock band that splits the difference between heavy metal and country music and swerves back and forth between the two while lyrically plowing the rich fields of Southern subject matter. Formed in Atlanta in 1986, the band was never recognized on a national level, but had a healthy, loyal following on college campuses throughout The South - with the largest fan base centering in Georgia , Alabama, North and South Carolina.

Drivin' N' Cryin's original lineup was singer/songwriter Kevn Kinney on guitar and vocals, Tim Nielsen on bass guitar and Paul Lenz on drums. Their first album, Scarred But Smarter (1986) on 688 Records was a showcase of southern rock with bluegrass mixed in for good measure. After this album, the band followed with Whisper Tames the Lion in 1988 for Island. At that time Lenz left the band and was replaced by Jeff Sullivan.

There were high hopes for the band at the time due to the success of R.E.M.; all things Southern were tipped to become the next big thing. But Drivin' n' Cryin's uniquely Southern spin on rock was lost on the rest of the world. Persevering with Mystery Road, with the addition of R.E.M. guitar roadie Buren Fowler on lead guitar, the band didn't alter style all that much.

For Fly Me Courageous (1990), the band finally took on the heavy metal mantle and ended up with a good hard rock record, with the odd folk track thrown in. The result was perhaps shocking and less than fashionable in the years when alternative music was just coming into its own. Drivin' n' Cryin's greatest strength was as a live band, as they toured tirelessly around the South, drawing an enthusiastic, college-age audience. A Drivin' n' Cryin' show in Atlanta had to be seen to be believed -- the sound of the crowd singing along would actually drown out Kinney's own unusually strong voice.

That same year, Kinney recorded the beautiful "Acoustic Folk" LP MacDougal Blues for Island. Drivin' n' Cryin's Smoke was released for Island in 1993 and ultimately finished the band's liaison with the label. It was followed by another, even sparer solo album by Kinney, "Down Out Law" (Mammoth) in 1994. He accompanied his solo releases by touring with R.E.M. guitarist Peter Buck, who produced the first album, while he and the band also filled the gap between its fifth and sixth records performing acoustic dates throughout the South.

By the time the more gentle "Wrapped in Sky", the band's Geffen Records debut in 1996, hit the shelves, they were nearly forgotten -- lost in the void that many bands of their generation would find themselves in the wake of grunge. Kinney, Nielsen and Sullivan have held strong -- with the addition of Joey Huffman on keyboards for "Wrapped in Sky". Fowler has since left the fold.

Too Late To Turn Back Now

Songs For The Turntable (EP)

Songs From The Psychedelic Time Clock

Songs About Cars, Space And The Ramones (EP)

Songs From The Laundromat (EP)