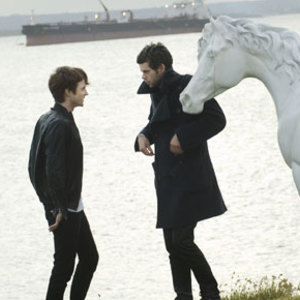 Pnau is an Australian dance music duo originating from Sydney, Australia. The duo consists of musicians Nick Littlemore (vocals, production) and Peter Mayes (guitar, production). The pair have achieved multiple successes throughout their career with their award-winning debut album Sambanova,their universally acclaimed 2008 release Pnau, their breakthrough side-project Empire of the Sun,and their multiple chart-topping singles. Pnau is also recognized for their heavily publicized apprenticeship under musician Elton John, who signed the duo after listening to their record Pnau.

A number of projects featuring Elton's involvement with the band are currently in development, such as Pnau's next album 'Soft Universe' and an album featuring Pnau recreations of Elton John's hits

The new album by the Australian duo Pnau, due out in summer 2011 and tentatively titled Soft Universe, is the finest example yet of their epic techno pop. The faster, more uptempo tracks - using their best-known songs to date, Embrace and With You Forever (the latter featuring Luke Steele of The Sleepy Jackson and Empire Of The Sun), as the template ' are their most accessible and uplifting ventures yet into the territory of supercharged anthemica.

For Nick, Elton's involvement has been a lifeline. 'He's been incredible at mentoring me through a period of depression,' he reveals. And Pnau have been able to return the favour, working on an album based on the songwriting legend's massive back catalogue, on a project that will amount to a thorough re-examination of his work. It is bound to cause tremendous interest in 2011.