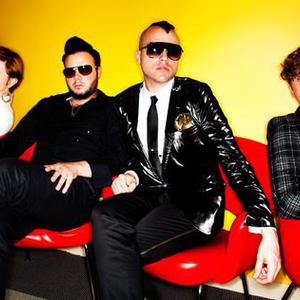 Neon Trees is an alternative rock band which formed in Provo, Utah in 2005, with origins in Southern California. Formed initially by neighbors Tyler Glenn (lead vocals/keyboards) and Chris Allen (guitars), the band made its first home in Provo, eventually adding Branden Campbell (bass) and Elaine Bradley (drums/vocals) to the lineup. In 2010, the band's single "Animal" peaked at #1 on the Billboard Alternative Songs chart.

Although a well known band in Provo, the band didn't receive nationwide exposure until late 2008 when they were chosen as openers for several of The Killers' North American tour dates. Not long after, the band was signed by major record label Mercury Records in early 2009. Additionally, the group was voted Band of the Year in 2009 by City Weekly, a popular Salt Lake City publication. Although they had several prior independent releases, the band released its debut album at Mercury/Def Jam, Habits, on March 16, 2010, with "Animal" as its lead single. The band performed "Animal" during their March 23, 2010 appearance on Jimmy Kimmel Live! and the band toured opening for 30 Seconds to Mars and MUTEMATH throughout the Spring of 2010.

"Everybody Talk" was the first single from their sophomore album Picture Show. The single was released to Alternative Radio on December 7, 2011 and made available to digital retailers via Mercury Records on December 20, 2011. (Everybody Talks Songfacts)

I Can Feel You Forgetting Me

Songs I Can't Listen To

Sleeping With A Friend (CDS)