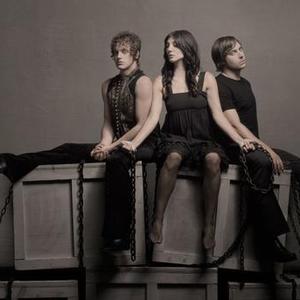 Nico Vega is an American rock band from Los Angeles, California, formed in 2005. The band consists of lead singer Aja Volkman, guitarist Rich Koehler and drummer Dan Epand. Comparisons have been made to The White Stripes in that they have never had a bass player (Note that in 2012, they added Jamilla Weaver to the touring line-up playing bass). The band is known for their dynamic live performances led by singer Aja Volkman. Her vocal style has been compared to that of Janis Joplin.

After releasing their debut EP, Choose Your Words Poorly, on their own in early 2006 and establishing themselves as a popular draw on the local concert scene thanks in large part to Volkman's uninhibited and minimally clothed on-stage performance style, Nico Vega signed with MySpace Records, the new recording arm of the popular social networking site, for their second EP, 2007's No Child Left Behind. Their first full-length self titled debut album was released in February of 2009. It featured three songs produced by Linda Perry -- So So Fresh, Wooden Dolls and Gravity - while the rest were produced by Tim Edgar. The album was mixed by Tchad Blake. The band's popularity soared when they performed three songs on Last Call with Carson Daly in 2009.

Nico Vega toured actively in 2009 supporting their first album with acts such as former Bush singer Gavin Rossdale, Semi Precious Weapons, Neon Trees, Manic Street Preachers, and Shiny Toy Guns. In 2010 they toured with The Soundtrack of Our Lives, Metric, Sweethead, Saint Motel, and Imagine Dragons. In 2011 they toured with She Wants Revenge and Blondie. In 2012 they toured with Neon Trees.

The song "Beast" of Nico Vega's first self titled album was featured in a trailer for the video game Bioshock Infinite in October of 2012 creating a renewed interest in the track.

The band's sophomore album, titled We Are The Art, will be out in April of 2013 on Five Seven Music. We Are The Art was recorded in studios around Los Angeles as well as at Sonic Ranch Studios in Texas. It showcases the band's trademark blues-laden guitar rock, with soaring synths thrown in for good measure.

At the end of October 2012, Nico Vega debuted a video of the title track, We Are the Art, on Vice.com. It was written and directed by Daniel Epand, the band's drummer.