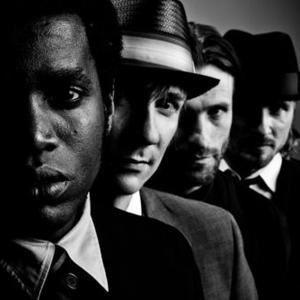 Vintage Trouble, based in Los Angeles, is the brainchild of Ty Taylor (vocal) and Nalle Colt (guitar). Combining their love for original soul and rhythm & blues, the two set up a basic home studio in Venice Beach and started crafting the beginnings of Vintage Trouble. Already a friend of both, Rick Barrio Dill (bass) came along and added his shared bass influences and energy into the newly formed project.

To make the band complete, Richard Danielson (drums) was recruited not long after to add the authentic and edgy take that was needed on the drums. With these collective energies and inputs in place, a new kind of soul band had been born with unlimited creativity and force.
The power foursome then moved to commune, create and rehearse amongst the famed musical lore of Laurel Canyon. Within two weeks of rehearsals in early 2010, the group quickly began playing local shows and late night speakeasies. Led by timeless vocal tone and presence, small tweed amps, and a mission to move as many people as possible, the band quickly gained a reputation as a high energy and truly mesmerizing live act whose performances feel like down-home revivals with an uptown edge. Sticking to their roots of mid-century original soul music and recording techniques, the band used a lean three-day recording session with full takes and no-frills to turn out 12 new songs a mere two months into the project. With singles like "Gracefully", "Nancy Lee", "Still & Always Will" and "Blues Hand Me Down", the resulting sound brings you back to the days of vinyl records, sweaty juke joints, and the feel and essence of the original soul movement.