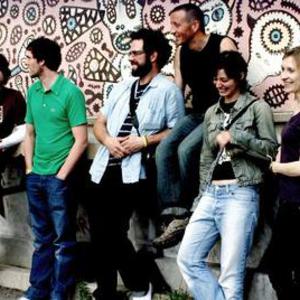 Baby Charles are a British Deep Funk band fronted by soul sensation Dionne Charles; backed by Toby Sendall - guitar, Simon Hill - bass, Graham Sowerby - drums, Georgina Carroll - flute, Sigi Beare - bari / alto sax, Lee Nicklen - keys and Will Rumfitt - trombone. They have been inspired by the late-sixties sounds from the likes of The J.B.'s and The Meters This band knows how to play a fine repertoire of songs, ranging from covers of old soul-funk classics to other more obscure grooves.

This band knows how to play a fine repertoire of songs, ranging from covers of old soul-funk classics to other more obscure grooves. They also have their own material, including their debut album which was released in 2008 and three 45's: 'No Controlling Me', 'Back of My Hand' and 'I Bet You Look Good on the Dance Floor', released in 2006, 2007 and 2008 respectively.

They received immediate praise from the highest ranking funk djs including: Snowboy, Keb Darge, Jazzman Gerald, Monk One, and especially Andy Smith, who snapped up their debut 45 for his 'Let's Boogaloo Vol 4' compilation, and got them to play at the album's launch party at Cargo in 2007. Mark Lamarr was so impressed by their debut single, he invited the band to record six tracks live in session for his God's Jukebox show on BBC Radio 2. Baby Charles' music can be heard on radio stations world-over.

In July 2007, Baby Charles supported The James Taylor Quartetat the Soul Cookers Hammond Funk Festival in Saint-Paul, Marseilles. That same funky month, the mixing of the band's debut album was completed and sent to Mark Lamarr, who played their cover version of the Arctic Monkeys track 'I Bet You Look Good on the Dancefloor' on the Jonathan Ross BBC Radio 2 Show. Mr Lamarr has also kindly written the sleeve notes for the Baby Charles debut album, which was released by Italian label Record Kicks in March 10th 2008 and later on in the year the album was released in Japan by P-Vine records.

To date Baby Charles can be seen performing all over Europe and sometimes playing and supporting many top artists such as Fred Wesley, The New JB's, Angie Stone, etc. They are constantly offered requests for them to play in countries further afield such as America, Canada, Australia, Cuba, Brazil etc.

Baby Charles are currently busy writing their next album which is due for release in 2010.