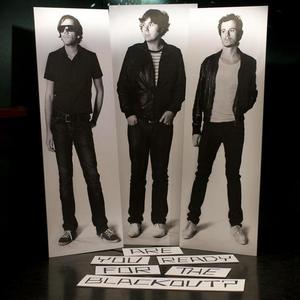 Formed in 2002, X-Wife set their world-class standard early on: ?Rockin' Rio? (2003), their debut e.p., was a real ?stone in the pond?, introducing a band building on a post-punk inheritance from bands like Suicide or Gang of Four, managing to consolidate avast modern lexicon that was already very much their own, where distortion and analogue electronics from a vintage drum machine served an ambitious, well informed song writing style.

?Feeding the machine? (2004), the first full length album, confirmed and furthered the expectations generated by ?Rockin' Rio?, and international acclaim ensued. They were praised by James Murphy, LCD Soundsystem's mentor, and by some of the most influential Blogs like Fluxblog and One Louder. The band was then invited to perform at the reknowned New York radio station WFMU, on the Cherry Blossom Clinic show by Terre T., as well as headlining the second edition of the ?Electronic Bible? compilation by the British White Label Music. They were also, that year, one of the best sellers in reference shops like Other Music and Insound.

With the steady growth of interest in the band, things happened naturally. They have supported bands like Artic Monkeys, Soulwax, Liars, Simian Mobile Disco, Love is All, TV on the Radio, Gossip, Chemical Brothers, LCD Soundsystem and Justice, amongst others, and performed in cities like New York, Austin (South by Southwest), London, Paris, Madrid, Barcelona (Primavera Sound and Razzmatazz) and Bilbao, as well as a 6 date mini tour in Italy. Their second album, ?Side Effects? (2006), licensed in Spain by Pupilo Records, showed the work of a band that continuously strives to improve, where the drum machine gave way to live drums.

In 2008 X-Wife release a 7" advance single off their new album "Are you ready for the blackout?", their best thus far, a record in which X-Wife assert themselves with a musical language and sound that is all their own, with a unique aesthetic coherence that is both modern and timeless.

"Are you ready for the blackout?" has been voted among the year's best releases by Blitz magazine and Lisbon's Radar FM, and is being received enthusiastically around the world, as witnessed by the reactions from tastemaker Blogs: Silence is a Rhythm Too writes, "They sing in English and they are as good as any number of their musical peers (CSS/LCD Soundsystem/The Rapture/DFA 1979"; Ohh! Crap says, "They kinda remind me of The Rapture faggy coolness but with a CSS quirky energy - something the members of Hot Chip would have on their iPods." Ear it now comments, "(It's) Not very often that Portugal contributes musicians to the global music scene (at least not that I find because I'm sure there are plenty of quality musicians there) but here is X-Wife taking us back to the indie genre.", placing the band amidst the best that is out there today, anywhere in the world of new music.

Are You Ready For The Blackout