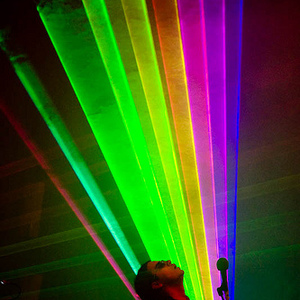 Ghostland Observatory is the duo of front man Aaron Kyle Behrens and producer/drummer Thomas Ross Turner. Behrens' vocal style and stage performances are unique and uncompromising, and he has drawn early comparisons to Freddie Mercury and Prince. They are not a band, but an agreement between two friends to create something that not only heals their beat-driven hearts, but pleases their rock ?n roll souls.

Turner is heavily influenced by electronic artists such as Daft Punk, Laurent Garnier and Green Velvet, as well as rockers such as The Animals, David Bowie, and The Clash. With their spectral blend of electronics, drums, guitar and vocals, they have emerged with a sound that is the culmination of past influence and present inspiration, and can only be described as BALLSY (with an intrinsic HOTNESS).

Ghostland Observatory is perhaps most famous for their energetic live show, which more often than not features seizure-inducing light shows, stage dives, uncontrolled rave pits, interpretive dancing, back injuries, pigtails, ominous capes, and thousands of dedicated fans who have traveled from far and wide to experience the madness since the band's conception in 2004.

Not to mention they're from a little place called Austin, TX.