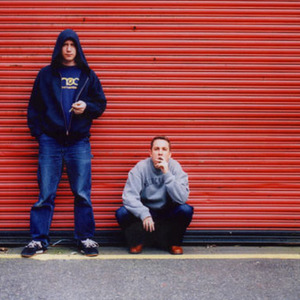 The Two Lone Swordsmen are British DJ and producer Andrew Weatherall and studio engineer Keith Tenniswood aka Radioactive Man. Formed in early 1996, following the dissolution of Weatherall's influential The Sabres of Paradise techno act, the Swordsmen have explored a variety of styles, from electro to post-punk to idm. Originally they released material on the label Emissions Audio Output, which Weatherall ran.

However, the small nature of the operation limited the duo's success and they have since signed to Warp Records, making them labelmates with acts such as Squarepusher, Autechre and Boards of Canada. In 2007 the Swordsmen released two albums, Wrong Meeting and Wrong Meeting II, on Weatherall's own Rotters Golf Club label.

From The Double Gone Chapel

A Virus With Shoes

A Bag of Blue Sparks [ep]