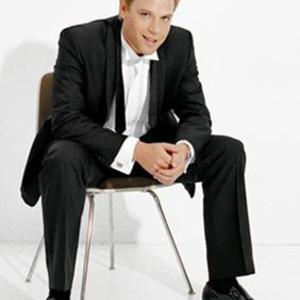 Tom Gaebel is a German singer and leader of a big band named after himself (he changed the spelling of his last name, avoiding the umlaut to give it a more international sheen). He was born on January 13, 1975, in Gelsenkirchen, Germany, and quickly began to play various instruments, among them drums, trombone, piano, and the violin. Even during his high-school days, he was a member of various bands -- two big bands and a rock band called Goresaw, which managed to land opening slots for popular bands like the Donots and Jazzkantine.

He then studied jazz vocals at the Amsterdam Conservatory, where he graduated summa cum laude, and after performing and singing in various big bands (the Young Sinatras, Tobias Kremer Big Band), he formed his own group in 2005: Tom Gaebel & His Big Band. His debut album, Introducing: Myself, featured a mixture of standards and a few of Gaebel's own compositions, and in several concerts and TV appearances, Gaebel proved himself to be a popular swing and big band leader as well as an effortless entertainer. A live DVD, Live in Concert, followed in 2006. Gaebel's second album, Good Life, released in 2007, featured more originals and inspired comparisons to Frank Sinatra (obviously), Tom Jones, and Burt Bacharach.

So Good To Be Me

Music To Watch Girls By