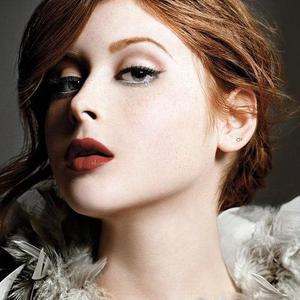 Rebecca Renee Olstead (born June 18, 1989) is an American actress and singer. Active since childhood as an actress, she is best known for her roles in the TV sitcoms Still Standing as Lauren Miller and The Secret Life of the American Teenager as Madison Cooperstein. In addition, she has recorded five studio albums, primarily of jazz music. Renee developed a great love for music at an early age and honed her voice by singing

Renee developed a great love for music at an early age and honed her voice by singing
along with the radio. Before long she was entering talent contests and appearing in
local musical productions. Her aspirations for stardom were documented on video and
became the subject of two E! television documentaries,
"The Making of a Child Star" and "The Journey Continues".

In 1995, Renee appeared in her first commercial, the award winning ad for Levi Jeans.
In 1998 she did a Segento Cheese commercial.

In 1998, Renee appeared in the episode "Doodlebug" in "Touch By An Angel".

In 1999, Renee's first major motion picture roles were "The Insider",
starring Al Pacino and Russell Crowe, and "End Of Days" with
Arnold Schwarzenegger. And, in 2000, she appeared in "Space Cowboys".

In 2002, she had her first major role in the CBS comedy "Still Standing", a four year run.

But, by 2002, Renee's second career, her singing career, began to take shape.
After she saw the movie "Pleasantville", she fell in love with Etta James's "At Last",
which began a love affair with the music of Billie Holiday, Ella Fitzgerald,
Anita O'Day and the Great American Songbook.
Then Renee was able to perform with Eddie Reed's Swing Band playing LA area clubs.
In September 2002, she released "By Request" to commemorate her club performances.
"At Last" being one of the tracks.

Renee gained the attention of Grammy Award winning producer David Foster
and subsequently signed a contract with the Warner Records label.
In 2003, 13 year old Renee performed at the Playboy Jazz Festival singing
"At Last" to an amazed jazz audience, who gave Renee a standing ovation.
Bill Cosby, whose jazz band backed Renee quipped that ?she's only 13
and knows only one song?.

Finally, in May 2004, all elements of Renee's career came together.
On the "Still Standing" final episode, of the second season, she performed "Summertime",
in a dream sequence, the first track on her self-titled CD "Renee Olstead",
produced by David Foster, released that month.
The release started Renee on a whirlwind promotional tour starting with
the "Today Show" and "Jazz At Lincoln Center Spring Gala" in NYC.
Montreux Jazz Festival, as part of a European tour, David Letterman and
finally Oprah ended a busy 2004. Renee's CD was #5 on the
Billboard Jazz Chart, for 2004, after many rave reviews.

In 2004, Renee recorded two songs for movie soundtracks.
She recorded "Merry Christmas In Love" for the Italian movie "Christmas In Love"
and "A Love That Will Last", a track on her CD, was used in "Princess Diary 2".
Also, in the summer of 2004, Renee's next film "13 Going On 30" was released.

During and after the end of the "Still Standing" run, in the Spring of 2006,
Renee continued to perform her music around the world.
She performed in numerous charity events in the US.
Renee again toured Europe, this time with B.B. King, performed in Live 8,
in Berlin, and with Chris Botti and at the "Unite The Stars" charity event,
in South Africa.

In 2008, she recorded her third movie soundtrack with "Ain't we Got Fun"
for the movie "Kit Kittredge: An American Girl".

TV came back in the picture, in 2008, as Renee was cast in the series
"The Secret Life Of The American Teenager" as Madison.
In the final episode, of the second season, again her two careers came together,
as Madison sang "Fly Me To The Moon" and
"Someone To Watch Over Me" at a wedding reception.

In 2009, Renee's long awaited CD "Skylark", again produced by David Foster,
was released, and peaked at #3 on the Billboard Jazz Chart.