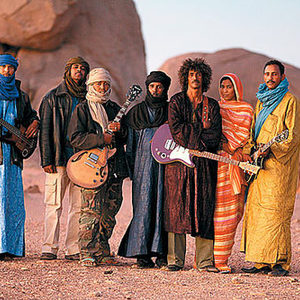 Formed in 1982, in strikingly unusual circumstances for a musical ensemble, Tinariwen blend ancient musical traditions with radical contemporary politics. Despite severe natural and man-made hardships, young Kel Tamashek exiles continued performing the traditional music of their Tuareg forebears in the southern Sahara while simultaneously fighting against the government of Mali. Forced to seek an alternative to starvation and repression in drought-stricken Mali, many of these young nomads hoped to attain a better life by striking up what proved to be an uneasy alliance with Libya.

Forced to seek an alternative to starvation and repression in drought-stricken Mali, many of these young nomads hoped to attain a better life by striking up what proved to be an uneasy alliance with Libya. The hoped-for aid in their struggle with the Mali government failed to materialize, but in the meantime some of the rebels had evolved a form of music that kept alive the music of their forefathers while simultaneously communicating radical political messages. This music is known as tishoumaren, music of the ishumar (the unemployed). Usually performed by groups of 30 and more instrumentalists and singers, tishoumaren acknowledges contemporary western music, especially rock, as well as other music forms prevalent in the Middle East, while never losing touch with the original ancient form. In some instances, players not only adapt traditional forms but also substitute modern instruments for the traditional lutes, flutes and one-string violins. The electric guitar in particular has become popular, even though circumstances demand the availability of portable generators.

The music itself is spare and haunting, an aural reflection of those same open spaces. The lyrics of their songs, perhaps more accurately termed sung poetry, carry outspoken political thought that draws attention not only to repression in Mali, but also to the enforced exile of many and the continuing struggle for self-determination of the Tuareg nomads. Song structures are many and varied and include elemental call-and-response patterns as well as (to western ears) discordant notes that call to mind the blue notes favoured by western blues and jazz players overlaid upon a solid four-beat rhythmic foundation that is itself uncommon to the region although compatible with much western popular music.

Tinariwen's first recordings were to cassette, sales and even possession of which carried harsh penalties in Mali and Algeria. In the early 00s, availability of albums encouraged more widespread awareness of the music and its underlying political messages.