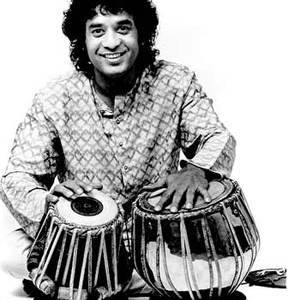 Ustad Zakir Hussain (born 9 March 1951), son of tabla player Ustad Allah Rakha, is the most famous classical tabla player in India (and, probably, in the world) today. He is appreciated both in the field of percussion and in the music world at large. He has won many awards and much recognition for his contributions. Zakir Hussain has worked with many leading Western and Indian artists, and has produced many works of East-West fusion, perhaps most notably with George Harrison.

Zakir Hussain has worked with many leading Western and Indian artists, and has produced many works of East-West fusion, perhaps most notably with George Harrison. In the 1970s he recorded with an American psychedelic band called Shanti, with John McLaughlin in Shakti, with Shankar in the Diga Rhythm Band, with Mickey Hart on his Rolling Thunder album, and on the soundtrack for the movie Apocalypse Now. Shakti reunited in 1998 under the name Remember Shakti. Zakir Hussain has also continued to perform on many of Mickey Hart's albums, including Planet Drum, and on numerous recordings by John McLaughlin.

In 1992, Zakir Hussain founded Monument Records to produce live concert performances by masters of the classical music of India. The label presents Zakir's own world percussion ensemble, The Rhythm Experience, both North and South Indian classical recordings, Best of Shakti, and a Masters of Percussion series.

Sound Scapes - Music Of The Deserts