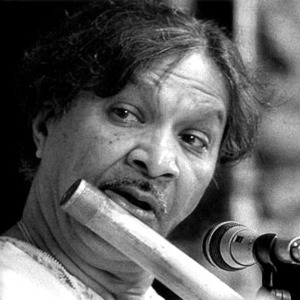 Hariprasad Chaurasia (b. 1st July 1938) is known internationally as the greatest living master of the bansuri, the North Indian bamboo flute. Chaurasia is among the small but growing number of classicists who have made a conscious effort to reach out and expand the audience for classical music. He is probably the most accessible Hindustani musician, and has done much to popularise the bansuri and classical music.

Hariprasad Chaurasia was born into a non musical family in Allahabad. His father was a wrestler. His mother died when he was very young. Hariprasad had to learn music almost in secret, scared of the father who wanted him to become a wrestler. First he started learning vocal music from Pt. Rajaram at the age of 15. Later, he switched to playing the flute under the tutelage of Pt. Bholanath of Varanasi. Much later, while working for All India Radio, he received guidance from the reclusive Smt. Annapurna Devi (daughter of Baba Allaudin Khan).

Chaurasia is a rare combination of innovator and traditionalist. He has significantly expanded the expressive possibilities of the bansuri through his masterful blowing technique. He is one of the busiest North Indian classical musicians, regularly travelling and performing throughout the world.

Apart from classical music, he has made a mark as a Hindi-language film-music director along with Shivkumar Sharma, forming a group called Shiv-Hari. He has also collaborated with various world musicians in experimental cross-cultural performances, including the famous fusion group Shakti.

Music of The Rivers