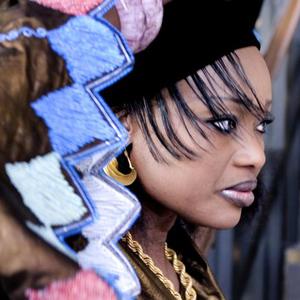 Oumou Sangar&eacute; (born February 25, 1968 in Bamako) is a wassoulou musician from Bamako, Mali, sometime referred to as "The Songbird of Wassoulou." Wassoulou is descended from traditional hunting songs, and is accompanied by a calabash. Many of Sangare's songs concern love and marriage, especially freedom of choice in marriage. Her 1989 Moussoulou album was an unprecedented West African hit. In 1995, she toured with Baaba Maal, Femi Kuti and Boukman Eksperyans. Other albums include Ko Sira (1993), Worotan (1996), and a 2-CD compilation Oumou (2004), all released on Nonesuch Records.

Oumou's latest album "Seya",(Joy) released in 2009,has taken around two or three years to come to fruition. "I choose my songs very carefully. I learn how to put them across first on the stage." Her music is bold, seductive, funky and vibrant, but it's her lyrics that open people's eyes. "For me, the lyrics are more important than the melody. I write almost all my own words. I also perform the classics of Malian tradition. I draw a lot of inspiration from what happens in society. As soon as I see or feel something, I write it down. I say what I want, and what I think, because I am a free woman. I believe that my music has had an impact on the life of African women." "It's true that when I sing it's joyful but in amongst that joy I always take the opportunity to slip in messages that educate my nation."