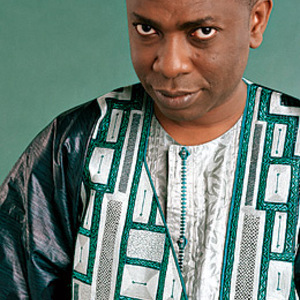 Youssou N'Dour (born 1 October 1959 in Dakar, Senegal) is a singer, percussionist and occasional actor. N'Dour is one of the most celebrated African musicians in history, his mix of traditional Senegalese mbalax with eclectic influences ranging from Cuban rumba to hip hop, jazz, and soul has won him an international fan base of millions. N'Dour was born in Medina in Dakar, Senegal, in 1959 and started his music career singing in small clubs in Dakar in the Wolof language, which is predominantly spoken in Senegal and Gambia.

N'Dour was born in Medina in Dakar, Senegal, in 1959 and started his music career singing in small clubs in Dakar in the Wolof language, which is predominantly spoken in Senegal and Gambia. He's most popular for his mbalax beat which gave him the title "Roi de Mbalax" (King of Mbalax), and is a household name in Senegal, Gambia and neighbouring countries in West Africa with a long list of hits from the early days in the 70s to date.

In 1979, he formed his own ensemble, the Etoile de Dakar. His early work with Etoile de Dakar was in the typical Latin style popular all over Africa during that time, but in the 1980s he developed a unique sound when he started his current group, Super Etoile de Dakar, featuring Jimi Mbaye on guitar, bassist Habib Faye, and tama (talking drum) player Assane Thiam.

N'Dour was introduced to the Western audience when Peter Gabriel had him appear on his 'So' album (in 1986) and theb took N'Dour and The Super Etoile de Dakar on the road with him in a subsequent world tour. N'Dour has also collaborated with a lengthy list of influential artists including Paul Simon, Neneh Cherry, and Branford Marsalis.

He is endowed with remarkable range and poise, a composer, bandleader, and producer with a prodigious musical intelligence. The New York Times most recently described his voice as an "arresting tenor, a supple weapon deployed with prophetic authority". N'Dour absorbs the entire Senegalese musical spectrum in his work, often filtering this through the lens of genre-defying rock or pop music from outside Senegalese culture.

Youssou N?Dour is currently the new minister of Culture of Senegal as a reward for his campaign against the former president of Senegal Abdoulaye Wade who was defeated by Macky Sall in February 2012.

Joko from Village to Town