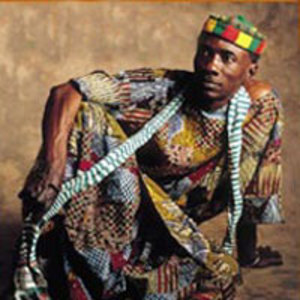 Vieux Diop, whose real name is Alioune, takes the heart of West African music into new territory, making it modern without losing its ancient sight. Vieux owes his musical heritage not only to his mother, who was always singing the melodies and rhythms of Senegal, their West African homeland, but to his love of American music. ?John Lee Hooker was my guy, and James Brown, Otis Redding, Wilson Pickett.?

His first instrument, at age 11, was a set of trap drums, which he played on Senegalese singer Youssou N'Dour's first hit recording in the 1970s. He played with N'Dour's band Jamono in Dakar and toured with him in Gambia.

Vieux studied music in Dakar (the capital of Senegal) as well as attending university, steeping himself in the folklore and traditional instruments of his native country. Vieux plays kora (a ?bass' kora), the jembe and samba drums, and other indigenous instruments. Along with his understanding of
intricate musical patterns, Vieux has a talent for creating and singing beautiful and poetic lyrics.

His goal, he says, is to ?spread African music in general and Senegalese music in particular for love and enjoyment. Music helps us understand one another better and accept each other as human beings.?

When Diop, arrived in New York in 1983, he discovered that "African music and culture was really not known. I remember that if you went out in African clothes, people would look at you and wonder why you were wearing pajamas."

Like many immigrants, Vieux Diop moved to America to "experience new things. I wanted to come over, see the U.S., and try my luck."

Meeting some other Senegalese, he began playing his kora with them, and made ends meet by teaching language classes. Although music was his focus, it took 11 years before he issued his first album, the Caribbean-flavored Deeso, followed in 1995 by Vieux Diop (Vieux Jo).

These days, Diop, makes a living from his instrument. He's worked as an outreach artist through the famous Juilliard School of Music, introducing thousands of kids in New York City public schools to African music, and he still performs regularly in high schools and colleges around the country, as well as at Disney World in Florida.

His own music, however, reflects almost 20 years of living in a cultural blender, rather than anything traditionally Senegalese. Guests like Celtic fiddler Eileen Ivers add their own flavor to the stew.

"Since I've lived in the U.S. for so long, I wanted to do something different," he explained. "My music has people from many different backgrounds, all putting their sound in, and it becomes one. But when you listen to it, there's still that African thing under it all; you can feel it. But it's for everybody to enjoy. This is a melting pot, everybody has something to offer."