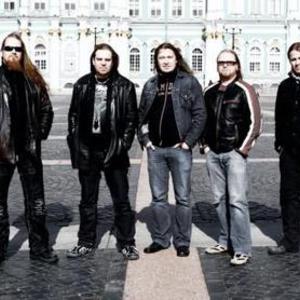 Formed in early 2000 by ex-speed/thrash Antidote guitarist Nino Laurenne as a project, his first demo was recorded at his personally owned Sonic Pump Studios. With a growing awareness of the project's potential, a commitment was made to create a full-fledged band. Laurenne then recruited former Antidote bandmate Titus Hjelm on bass and backing vocals, Pasi Rantanen on vocals and Mirka Rantanen on drums.

By the summer of 2001, Kari Tornack joined the ranks as keyboardist, and THUNDERSTONE evolved into a quintet. With a demo in circulation garnishing positive praise and the new line-up concentrating on writing new music, things came to the inevitable head in the Fall of 2001: Nuclear Blast's attention was captured, a record deal was secured, and THUNDERSTONE rushed into the studio within two weeks of the ink drying.

When THUNDERSTONE's self-titled debut hit worldwide audiences in 2002, the buzz proved to be loud. Recorded at Laurenne's Sonic Pump Studios in Helsinki, Finland (with Laurenne as guitarist, producer, and engineer) and mixed by Mikko Karmila (Children Of Bodom, Amorphis) at Finnvox Studios (Sentenced, Moonspell, Stratovarius), the hunger so evident in those ten songs delivered an overall dynamite package, and the feel-good album easily etched itself into the annals of quality Finnish heavy metal. Featuring accomplished compositions, a guest appearance by Timo Tolkki (a friend of Laurenne's for over a decade who gave him his first-and-only guitar lesson) on "Like Father, Like Son," and artwork by well-known German visual artist Thomas Ewerhard (Hypocrisy, Sodom, Destruction), this new Finnish band ended the year with a strong presence on numerous year-end "Top Metal Albums Of 2002" lists. In 2003, after being named "Newcomer of the Year" by the readers of Rock Hard Magazine, THUNDERSTONE celebrated their accomplishments with an extensive European tour supporting Stratovarius & Symphony X.

Inspired by their own ability to leave a mark on the scene, THUNDERSTONE returned to Sonic Pump to record their sophomore album, The Burning, which featured Symphony X guitarist Michael Romeo on "Drawn To The Flame." The album not only coalesced the band's collective personality through faultless production, but captured a grittier and more uninhibited performance by vocalist Pasi Rantanen. Among many other accolades (such as the appearance of their promotional video for "Until We Touch The Burning Sun" on Finnish television), the album celebrated a meteoric rise to #13 on the official Finnish album chart. While their European tour with Iced Earth was cancelled due to Jon Schaffer's back injury, THUNDERSTONE were determined to maintain their momentum and quickly booked another tour with Axel Rudi Pell, crowning another successful year by playing for thousands of fans at the world's most well-known metal festival, Germany's Wacken Open Air.

Despite a busy year the band entered the studio again in late 2004. The efforts of those sessions showcased the band at a new pinnacle. Tools Of Destruction (2005) ? the band's third album recorded at Sonic Pump ? is where you'll also hear THUNDERSTONE's accumulated live experience. One listen to the album's opening track, the breathtaking curtain-raiser "Tool Of The Devil," and the chorus' gargantuan hook will capture you as it did THUNDERSTONE's fellow Finns, who sent the song straight to #3 on the Finnish Singles Chart. Gigs in Finland and the first headlining European tour with label mates Crystal Ball followed.

After a short breather, the band returned yet again to the studio to record their fourth album in the fall of 2006. The same year also witnessed THUNDERSTONE's first appearance in the USA. In October the band was invited to take part in the Finnish Eurovision Song Contest. Never shy to take on a new challenge they heartily agreed. Again, what started almost as a joke ended up in phenomenal success: The band was voted second, losing only narrowly to Finnish Idol Hanna Pakarinen. The Eurovision fame resulted in the release of two singles, 10 000 Ways and Forevermore/Face in the Mirror, which both went straight to the top 3 in the Finnish single charts. Finally, the efforts of the previous studio sessions came to fruition when THUNDERSTONE's fourth studio album Evolution 4.0 was released in March 2007. Showing a darker side of the band and definitely moving them away from the ?power metal? of their first release, the album was liked by the fans and entered the Finnish charts at #10. Again, a Finnish tour and summer festivals followed.

Already preparing for a co-headlining tour with Swedish colleagues Nocturnal Rites, the band announced a shocking surprise in August 2007: THUNDERSTONE had parted ways with singer Pasi Rantanen and keyboardist Kari Tornack. Musical differences and motivation problems were quoted as the main reasons for the unexpected split. Despite the difficult situation, the rest of the band decided not to disappoint their fans and do the planned European tour. The band recruited vocalist Tommi ?Tuple? Salmela from Tarot and keyboardist Jukka Karinen and kicked ass all around the continent.

The temporary line-up created a flood of speculation, which came to an end with the announcement of the new line-up in early February 2008. The vocal duties were taken up by Rick Altzi, a Swedish powerhouse with an incredible voice that ranges from a rough whisper to a full-fledged scream. On the keyboards the band signed Jukka Karinen, who already handled the key duties on the 2007 European tour.

Never stopping even in the face of hardship, THUNDERSTONE rages on! In July 2008, the now multinational line-up retired to a cabin in the Finnish woods to write and record new songs. Inspired by the new sound, the band started laying down basic tracks for their fifth studio effort in August, while continuing pre-production on still more songs. The result was the aptly titled Dirt Metal, an album which is no doubt the culmination of the evolution toward a heavier and darker sound for THUNDERSTONE. Released in 2009 in Finland, the new masterpiece by the Finnish-Swedish Mayhem Crew is finally available worldwide! Hard-hitting yet ear-catching, rough yet subtle, the future of heavy metal: THUNDERSTONE!

Tool Of The Devil (EP)