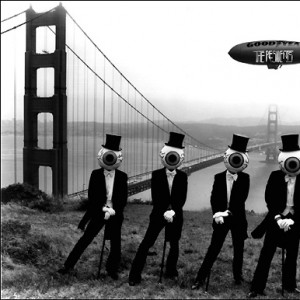 The Residents are an experimental music and visual arts group largely shrouded in mystery and myth. The Residents began recording in 1969, although many of these recordings from their early years have still gone unreleased to this day. The earliest material from The Residents, traded among bootlegs, was recorded in 1971. The Residents' first official release, Santa Dog, was released in 1972. Allmusic had this to say about the Residents: "Over the course of a recording career spanning several decades...

Allmusic had this to say about the Residents: "Over the course of a recording career spanning several decades, the Residents remained a riddle of Sphinx-like proportions; cloaking their lives and music in a haze of willful obscurity, the band's members never identified themselves by name, always appearing in public in disguise -- usually tuxedos, top hats and giant eyeball masks -- and refusing to grant media interviews. Drawing inspiration from the likes of fellow innovators including Harry Partch, Sun Ra, and Captain Beefheart & His Magic Band, the Residents channelled the breadth of American music into their idiosyncratic, satiric vision, their mercurial blend of electronics, distortion, avant-jazz, classical symphonies and gratingly nasal vocals reinterpreting everyone from John Philip Sousa to James Brown while simultaneously expanding the boundaries of theatrical performance and multimedia interaction.

It was commonly accepted that the four-member group emigrated to San Francisco, California from Shreveport, Louisiana at some point in the early '70s. According to longtime group spokesman Jay Clem -- one member of the so-called Cryptic Corporation, the band's representative body -- they received their name when Warner Bros. mailed back their anonymous demo tape, addressed simply "for the attention of residents". Finding no takers for their oddball sounds, the Residents founded their own label, Ralph Records, for the purposes of issuing their 1972 debut "Santa Dog", released in a pressing of 300 copies which were mailed out to luminaries from Frank Zappa to President Richard Nixon. Their debut full-length, 1974's "Meet The Residents", reportedly sold fewer than 50 copies before the group was threatened with a lawsuit from Capitol Records over its cover, a twisted, dada-esque parody of the art to "Meet the Beatles".

The follow-up, 1974's neoclassical excursion "Not Available", was recorded with the intention of its music remaining unissued; locked in cold storage upon its completion, only a 1978 contractual obligation resulted in its eventual release. 1976's "The Third Reich 'N Roll" was the next official offering, a collection of pop oldies covers presented in a controversial jacket portraying Adolf Hitler clutching an enormous carrot. After a 1976 concert in Berkeley, California which cloaked the Residents behind an opaque screen, wrapped up like mummies -- the most famous of only three live performances mounted during their first decade of existence -- they issued an abrasive 1977 cover of The Rolling Stones' "Satisfaction", which became an underground hit on both sides of the Atlantic at the peak of the punk movement. As the decade drew to a close, the group released a flurry of recordings, further building upon their growing cult following; among them were 1977's "Duck Stab/Buster and Glen", 1979's "Eskimo" (purportedly a collection of native Arctic chants) and 1980's "Commercial Album", a compilation of 40 one-minute "pop songs" that aired on San Francisco radio only because the Residents played them during the advertising time they bought.

In 1981 the Residents embarked upon their "Mole Trilogy", a prog rock collection of albums -- 1981's "Mark Of The Mole", 1982's "The Tunes Of Two Cities" and 1985's "The Big Bubble" -- recounting an epic battle between a pair of tribes named the Moles and the Chubs; a lavish, multimedia tour, "The Mole Show", followed. In the interim, the group also mounted another ambitious project, the "American Composer" series, although only two of the projected titles -- 1984's "George & James" (a reinterpretation of songs by George Gershwin and James Brown) and 1986's "Stars & Hank Forever" (celebrating John Philip Sousa and Hank Williams) -- ever appeared. Instead, in the wake of financial and corporate difficulties which resulted in the creation of a New Ralph label, the Residents issued the one-off "God in Three Persons" (a talking blues outing), and 1989's "The King And Eye" (a reinterpretation of Elvis Presley standards).

After losing control of the Ralph label as well as their back catalog, the Residents regained the rights to their music in 1990 and began reissuing long-out-of-print material as well as the new "Freak Show", a meditation on circus sideshows and carnival dementia. Four years later, Freak Show was reissued as a CD-ROM, marking the group's first leap into the new digital interactive technology; "Have A Bad Day" followed in 1996, and included the soundtrack to the CD-ROM game "Bad Day on the Midway." In 1997, the band celebrated their silver anniversary with the release of the career-spanning overview "Our Tired, Our Poor, Our Huddled Masses". "Wormwood: Curious Stories From the Bible" followed the next year, with "Roadworms" (songs from Wormwood as performed in the stage show) being issued in mid-2000. They followed that up with the awesome "Icky Flix" DVD, an incredibly detailed collection of their videos that featured both old and new soundtracks, 5.1 Digital Stereo Surround sound, countless hidden videos and in-depth histories of each individual track. That was followed by another one of their rare tours, which saw them incorporate the DVD into their live act and bring out guest singer Molly Harvey for some truly creative duets. The "Petting Zoo" retrospective followed in the spring of 2002, acting as a budget sampler for new fans and giving old fans something to tide them over while several high concept projects neared completion. The first was "Demons Dance Alone", a complicated pop album that hearkened back to the catchier material from "Duck Stab" and the "Commercial Album". That was followed in 2002 by a live retrospective called "Kettles Of Fish On The Outskirts Of Town" that contained 3 cd's and a DVD, and a further look at their past via remasters and remixes put out by Euroralph (including a remix of their previously unreleased and notorious "Warner Brothers Demo"). A DVD of the Demons Dance Alone tour came out in 2004 and another new project, "Animal Lover" was released in 2005."

Summer of 2006 brought the internet download project, The River Of Crime: Episodes 1-5. River of Crime was their first project with Warner Music Group's Cordless label. Following the success of "River of Crime", The Residents launched their weekly Timmy video project on YouTube. In 2007 they did the music for the documentary "Strange Culture" and also released a double instrumental album, "Night of the Hunters". On the Fourth of July, 2007, the planned October release of their latest project with Mute Records, The Voice of Midnight (a music theater adaptation of E.T.A. Hoffmann's short story Der Sandmann), was announced on their website.

On the 21st of May 2008 they announced on their website that their first North America tour since "Demons Dance Alone" for a project entitled "The Bunny Boy" is set to begin on October 9th in New York ? later an earlier date was added for Santa Cruz. Soon, it was announced that the tour will also include Europe, starting November 13th. On June 3rd, the Residents.com website boasted the planned release of "The Bunny Boy" which was released on September 1st. The website had posted information in which Foxboro claimed this would be a Farewell Tour; it was later revealed that this was nothing more than a mistake by Foxboro.