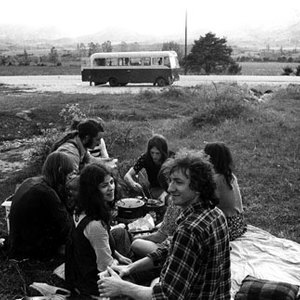 Henry Cow was an English avant-garde rock group, founded at Cambridge University in 1968 by multi-instrumentalists Fred Frith and Tim Hodgkinson. An inherent anti-commercial bias kept them at arm's length from the mainstream music business, enabling them to experiment at will. They remained in existence for 10 years, breaking up in 1978, and produced a body of music that was challenging, provocative and influential for years to come.

Collaborations with the similarly-minded band Slapp Happy led to an eventual merging of the two bands. Many of the members continued on as Art Bears. Henry Cow was among the founding members of the movement dubbed Rock in Opposition (RIO).

A number of people passed through Henry Cow over the years:

Their music was often experimental, making classification all but impossible. However, the following styles (amongst others) are often associated with Henry Cow:

Some of these styles may come closer to describing their music than others, and often it contained elements of all of the above, but in reality, Henry Cow simply remains one of those unclassifiable groups.

Henry Cow's music was challenging, not only to the listener, but also to the band themselves. They often composed pieces to challenge their own capabilities. Some of their music was scored beyond the conventional ranges of their music instruments necessitating that they "reinvent their instruments", learn how to play them in completely new ways. And yet their music may not have been as good as it could have been. Henry Cow conducted their affairs as a committee, having regular, minuted meetings with no decisions being made unless approved by the group. This included their music. Band members brought their ideas to the table but often they ended up being watered down as a result of the collective process, rather than strengthened, and many of their best ideas may not have been fully realised. Who knows what Henry Cow might have produced had individual members been given more free reign.

While their music is a decided "acquired taste", there is much to recommend in it, for as it is often dissonant and challenging, it is also rich and exciting, and yields more insights upon repeated listening.

Glastonbury, Chaumont, Bilbao And The Lions Of Desire