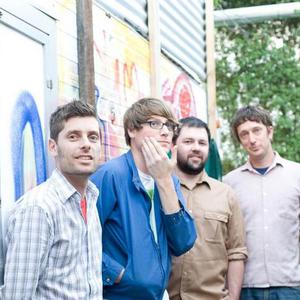 The Lucksmiths were an influential indiepop band from Melbourne, Australia which formed in 1993. The members are Martin 'Marty' Donald (Guitar), Taliesyn 'Tali' White (Vocals, Drums), and Mark 'Marky' Monnone (Bass) and in 2004 they acquired mid state orange's guitarist Louis Richter on second guitar. Whilst originating from beach-side Melbourne, the original three members of The Lucksmiths moved to inner Melbourne and fell in love with its charms.

The songs Under the Rotunda, The Cassingle Revival and Tmrw Vs Y'day all demonstrate as much. In the early 90's, they met Chris Crouch who had founded Candle Records. Crouch consequently began releasing their records, and they began to play the Melbourne indie circuit, most notably the Punters Club. This venue clearly holds a special place in The Lucksmiths' history as seen in the song Requiem For The Punters Club, written after its conversion to hipster bar Bimbos. While the others still reside in various inner Melbourne suburbs, Mark now lives in coastal Tasmania. This has not harmed the quality of The Lucksmiths' work nor is it a reflection of intra-band tension.

The Lucksmiths are noted for their simple melodies rich in humour and ironic verse. The majority of songs are written by Marty Donald. Although, both Tali White and Mark Monnone have written some of the band's finest songs. Many of their lyrics are based on the eccentricities of the everyday. Several songs also deal with the more usual pop-song issues of romance in relationships, but in a unique, gentle and easy-to-relate-to way.

There is also a persistent theme of Melbourne culture, most notably that of the inner city, as seen in frequent references to Melburnian placenames and themes. For examples, see the song The Sandringham Line, and many others. The Lucksmiths are also renowned for their creative use of language. English idioms and proverbs are referred to, played with and utilised to create poetically spontaneous verse. The songs virtually define clever lyricism. Whilst many of the idioms and references are distinctly Australian, their coupling of fantastic narrative lyrics with melody makes them so internationally accessible. Further, their songs almost always maintain a solid narrative with sensible and relevant choruses. When the narrative is abandoned, it is with good cause and in support of a more simple point (see T-Shirt Weather).

Marty Donald's lyrics in particular are filled with wordplay and puns, in particular the device of twisting a common phrase or clich?. In Frisbee, he says "that was the winter of my discount tent". "The Chapter In Your Life Entitled San Francisco" refers to "the non-specific northwest". Untidy Towns says "I got some mail I didn't open / It's an unread-letter day". Sometimes this can go a bit overboard, as in 'Synchronized Sinking', which contains the lines "why don't you let go of your boy and see / You've lost none of your bouyancy"; but that song also contains "Silhouetted in the smoke / From the shipwrecks at the bar / of the Anchor and Hope", which is, what many would refer to as poetic and skillful use of the English language.

Their musical setup, however, remains unusual and refreshing in a world of drum machines, synthesisers, and other elaborate gear. Tali sings and plays a minimal drum kit standing up at the front of the stage, with Marty to his right, Mark to his left, and Louis behind. This is often seen as a novelty, but nonetheless works perfectly, with their live performances being incredibly tight.

The Lucksmiths have been critically associated with indiepop, anti-folk and retro-pop. However, the band and their fans would consider The Lucksmiths as simply a pop band. This is a much fairer (and accurate) assessment.

In 2009 the band announced their breakup, with their final shows played in August.

Why That Doesn't Surprise Me

A Good Kind Of Nervous

What Bird Is That?