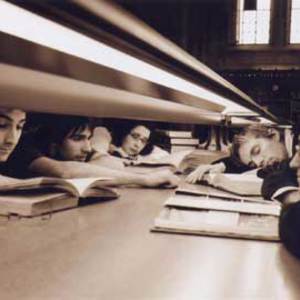 Math and Physics Club are an indie pop band based in Seattle, Washington. The members are Charles Bert (vocals, rhythm guitar), Kevin Emerson (drums), Ethan Jones (bass, keyboards) and James Werle (lead guitar), and through December 2007, Saundrah Humphrey (violin). This lineup coalesced in 2004, and has released three EPs and two full length albums on Santa Barbara-based Matinee Recordings. They are often associated with Australian labelmates The Lucksmiths and twee pop band Tullycraft, and Pitchfork Media described their work as "music to hold hands to."

They are often associated with Australian labelmates The Lucksmiths and twee pop band Tullycraft, and Pitchfork Media described their work as "music to hold hands to."

Both Charles and James were raised in Olympia, Washington, home of K Records and Kill Rock Stars, and they soaked up a thriving indie music scene. Before convening Math and Physics Club they were in a band called drive car girl (named after a Beat Happening song). Kevin played in a number of bands in Connecticut and Massachusetts before moving to Seattle, including a stint with a soul band called Soulwork. Kevin is the singer and co-leader of the band Central Services. Violinist Saundrah Humphrey left Math and Physics Club in December 2007, though it is reported on the band's unofficial myspace site that she may record with the band in the future.

Math and Physics Club can be seen as musical descendants of c86 and Sarah Records although no formal connection exists.