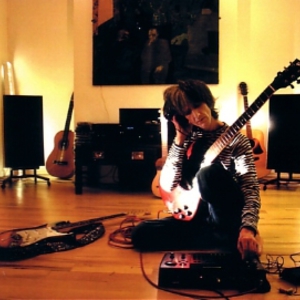 The Durutti Column, formed in 1978 is the ongoing band project of guitarist (and occasional pianist) Vini Reilly (born in Didsbury, Manchester, England in August 1953), often accompanied by drummer Bruce Mitchell. The basic idea behind Durutti Column's music is to break with whatever structure supports the foundations of musical formalism, in order to try and create a kind of music which really can belong to everyone.

The basic idea behind Durutti Column's music is to break with whatever structure supports the foundations of musical formalism, in order to try and create a kind of music which really can belong to everyone.

The Durutti Column partly derives its name from the struggle of revolutionary anarchist Buenaventura Durruti to liberate Spain during the bloody civil war of the 1930s. A legendary assassin and anarchist, he fueled a libertarian communist movement with lofty ideals and eventually led a formidable column of 6,000 men towards Zaragoza during the summer of 1936. His aim was to liberate the city, defeat Fascism and declare a free commune but his plan failed when the column became entrenched just outside the city. Later he was persuaded to go to Madrid with his men and take on Franco's Moroccan militia. During this escapade he was shot in the back.

The second source for the title comes from the activities of the Situationists Internationale in Strasbourg in 1966. In a grand gesture of anarchism they papered the walls of the city with a comic strip titled "The Return of the Durutti Column". (Note the change of spelling of Durruti's name). Vini Reilly explains: "I was always interested in the Situationists Internationale -- an anarchist group in Europe who published a book with a sandpaper cover so that it would destroy all the other books on the shelves. In the Sixties they were very radical and through their slogans, criticisms and ideas, wanted to change something. They used the title 'the Return of the Durutti Column' many times in their manifestos. So you can see that I saw the production of a very tranquil music in 1979 as an anarchic gesture!"

A Paean To Wilson CD2

A Paean To Wilson CD1

Love In The Time Of Recession

Treatise On The Steppenwolf

Sunlight To Blue... Blue To Blackness