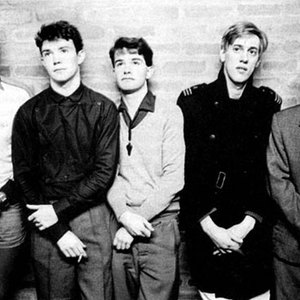 A Certain Ratio (aka ACR or A.C.R.) are a post-punk/funk band from Manchester, UK. Formed in the late 1970s, they were one of the bands (along with Gang of Four and The Pop Group) who forged the new musical hybrid which became known as punk-funk, a style which fused the energy and aggression of punk rock with the rhythms and musicianship of funk and soul. The band's members were originally Simon Topping, Jeremy Kerr, Martin Moscrop, Donald Johnson and Pete Terrell.

In 1979, ACR released their debut single "All Night Party"/"The Thin Boys" on the late tony wilson's and the late rob gretton's factory records, Manchester's legendary DIY collective/record label.
ACR's early sound consisted of repetitious, effects-heavy guitar lines over a funky rhythm section with Latin percussion and ethereal electronics, over which lay Simon Topping's dark, moody vocals. Examples of this can be heard on tracks such as 'Do the Du', 'The Fox' and 'Winter Hill'.

The band were initially criticised as being 'style over substance', as much attention was paid to the band's stage clothing and album artwork, all carefully orchestrated by Factory boss Tony Wilson. But ACR nevertheless gained a large following. They completed visits to the US, where their music was popular particularly in the clubs of New York.
Early albums include "To Each..." and the studio/live album "The Graveyard and the Ballroom".

During the early 80s, the band's personnel changed as Pete Terrell and Simon Topping left, the latter to study percussion in New York. Jeremy Kerr took over vocal duties, while keyboardist Andy Connell joined. During this time, ACR's music became more jazz/latin influenced on the albums "Sextet", featuring vocalist Martha Tilson (of Occult Chemistry), and "I'd Like To See You Again". The latter album contained fewer actual songs but more instrumental tracks than previously. In 1985, Factory released the 'best of...' album "The Old & The New" which contained that year's single "Wild Party", a monstrous piece of funk which demonstrated ACR at their peak. ACR released a cover of Stevie Wonder's "Don't Worry 'Bout A Thing" as a 12" single with Donald Johnson on vocals. This was an indication of where the band were heading.

In 1986, ACR released the album, "Force". This was a more commercial release than previous albums, containing jazz-tinged pop songs with the occasional vocals of Corinne Drewery (of Swing Out Sister) and saxophone by Anthony Quigley (who had recently joined the band).

ACR left Factory Records for the major label A&M. In 1990, the album "Good Together" was released which contained collaborations with Bernard Sumner (New Order/Electronic) and Shaun Ryder (Happy Mondays). This album developed the pop sound of "Force" and merged it with acid house electronics. This was shortly followed by "MCR", a mini album of new tracks and remixes from 'Good Together'. 'ACR:MCR' was seen as a return to ACR's roots as it was more dance orientated and harder edged. Vocalist, Denise Johnson (ubiquitous backing singer who provided vocals for many Manchester bands, including Electronic) joined the band in the studio and on the road around this time.

ACR continue to record and gig, maintaining a loyal following. Their early music has been acknowledged to have influenced bands such as Franz Ferdinand, radio4, LCD Soundsystem and Interpol.

Their back-catalogue has been re-released on Creation Records, Soul Jazz Records and LTM Records.

Throughout ACR's existence, its members have been involved in many diverse projects, usually connected to the Factory Records roster of bands.