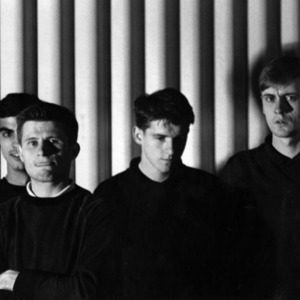 A neglected part of the Factory Records scene, the Stockholm Monsters are a key link between the bristly art-funk of A Certain Ratio and the good-foot indie dance vibe of Happy Mondays and the other Manchester bands of the late '80s. Often seen merely as New Order proteges (Peter Hook produced all but one of their records) and victims of both record company indifference and unnecessary potshots by the cynical British music press, the Stockholm Monsters deserved better treatment than they usually got.

Formed by teenage brothers Tony and Karl France (vocals/guitar and bass/keyboards, respectively) and fraternal twins Lita and Shan Hira (keyboards and drums, respectively), the Stockholm Monsters gathered in suburban Manchester in 1980, signing to local indie powerhouse Factory Records the following year. Just before the release of their first single, the Martin Hannett-produced "Fairy Tales," 17-year-old trumpet player Lindsay Anderson joined the band. Although "Fairy Tales" was a minor success, hitting the middle reaches of the U.K. indie charts, the Hook-produced follow-up, "Happy Ever After," was a sales disappointment.

Following another lineup change, with Lita Hira being replaced by guitarist John Rhodes and Anderson adding keyboards to her trumpet duties, the Stockholm Monsters released a fine EP, Miss Moonlight, in 1983. Unfortunately, despite Hook's continued involvement, Factory Records apparently lost interest in the group and shunted them to their Belgian subsidiary label Factory Benelux, then seen as the label's dumping ground for vanity projects and failed experiments. (Ironically, many post-punk connoisseurs now find Factory Benelux releases more interesting than most of the proper Factory releases of the era, the mother label having largely turned into a straight dance imprint after the massive success of New Order's "Blue Monday" 12".) The Stockholm Monsters' sole long-player, Alma Mater, came out in September 1984. A low-key record blending jangly guitars and skittering electronic percussion, Alma Mater bridges the gap between the British indie pop and dance scenes of the era much in the same way that New Order would on their next couple of albums. Half a decade later, of course, the Stone Roses and others would take this hybrid to the top of the charts and the forefront of the British national consciousness.

Armed with a deliberately provocative title and a cover photo of a nude pubescent girl, the aggressive and experimental 12" single "How Corrupt Is Rough Trade" charted higher than anything the Stockholm Monsters had released since their first single. Anderson left the group shortly after its release, and it was assumed that the Stockholm Monsters were finished. Surprisingly, a final single was released two years later, but its appearance suggested turmoil in the band's ranks. At the same time that the Peter Hook-produced version of "Party Line" came out on Factory in the U.K., the Italian label Materiali Sonori released a much different mix with a new set of B-sides, with the band getting the production credit. The band split for good shortly thereafter in 1987, with Shan Hira becoming a noted producer and studio owner in Manchester, working with the Fall, the Chameleons, and others. ~ Stewart Mason, All Music Guide