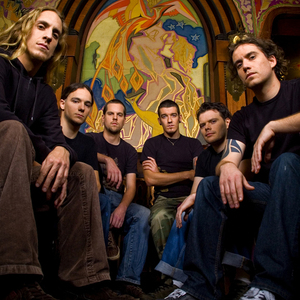 In 2003, the year of the launch of Textures'debut album Polars, the first reactions start to stream in: ?This is the best metal album that's ever come out of the Netherlands? according to the Dutch music magazine Oor. The standard is set. Textures, once just a promising up-and-coming band from Tilburg, The Netherlands, has now emerged, 3 albums later, as an established name in the worldwide metal scene.

The band's fourth album Dualism ? on the band's new home Nuclear Blast ? is groovier, catchier, and the production even grander than its 2008 predecessor Silhouettes. The band's trademark mix of expertly crafted brutality, melody, freaky, innovative rhythms and catchy vocals is still intact, with Bart Hennephof and Jochem Jacobs's expertly crafted sonic? um? textures and the unruly heavy-hitting of drummer Stef Broks creating the perfect metal cocktail. The climaxes of the songs on Dualism have been elevated to a higher level, partially due to the contribution of their new keyboard player Uri Dijk and new frontman Daniel de Jongh (ex-CiLiCe) who, as far as his sound goes, is every bit the talent as his predecessor Eric Kalsbeek.
Once again, the band took total control of every facet of the album. Everything was recorded at Split Second Sound, the new Amsterdam-based studio belonging to Jacobs, who produced the album. The band also handled all their own artwork and merchandising, which was designed by bassist Remko Tielemans.

The last album, Silhouettes, received worldwide acclaim from the international press. Everybody from Europe to the U.S. to India could sing along to the song ?Awake,? which received strong support from online metal communities and got prime time airplay on Radio 3 fm (NL), Radio 1 (UK) and Triple J (AU). The video clip got airplay on MTV in Europe and Russia, and VH1 in India. In the Netherlands Textures reached the Album Top 100 for the very first time. The band played at Graspop in Belgium, the Great Escape in the UK, Tuska in Finland, Hellfest in France and Lowlands in their home country the Netherlands and also toured with Arch Enemy and All That Remains, among others.
In 2009 the band flew to Bangalore to play India for the first time ? where they'd just been featured on the cover of India's most prestigious rock magazine The Rock Street Journal ? and delivered an explosive headline performance for over 5,000 fans. Exactly a year later they return for another festival, dazzling the University of New Delhi where the band was welcomed by throngs of thousands once again.
With two new band members, a new record label and a new album Textures will be hitting the road once again, touring all over the world in support of the album and going places where they've never been before, both literally and metaphorically.