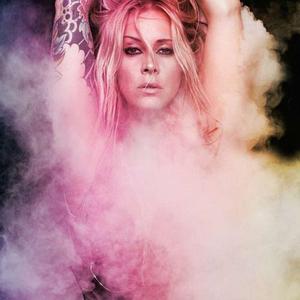 Anouk (Anouk Teeuwe, born April 8th, 1975 in Den Haag, Netherlands), is a multi platinum selling and multi award winning dutch singer. Anouk Teeuwe Biography: She initially sang at weddings and parties with the band Shotgun Wedding, prior to meeting Barry Hay of Golden Earring, a friend of her ex-husband Edwin Jansen. Hay believed Anouk to have talent, and offered to write her some songs, one of which was her 1996 debut single Mood Indigo; written in collaboration with George Kooymans (also from the Golden Earring).

Anouk Teeuwe Biography:
She initially sang at weddings and parties with the band Shotgun Wedding, prior to meeting Barry Hay of Golden Earring, a friend of her ex-husband Edwin Jansen. Hay believed Anouk to have talent, and offered to write her some songs, one of which was her 1996 debut single Mood Indigo; written in collaboration with George Kooymans (also from the Golden Earring).

After she met Bart van Veen, her co-writer, the pair wrote a few songs. On September 5, 1997, she released her second single, Nobody's Wife, which remained at the top of the Dutch music charts for a number of weeks. Her debut album, Together Alone also turned out to be a huge success.

In 1998, Anouk won two awards from Dutch music station TMF (The Music Factory) in addition to an Edison award. During the summer, she played at various festivals, including two 'big ones', Pinkpop and Parkpop.

Her second album, Urban Solitude, was released in November 1999, and included the singles R U Kiddin' Me, The Dark, Michel and Don't. Each of these reached the Dutch Top 40.

Shortly afterwards, Anouk went to the United States in order to get a record deal. Negotiations with her American label (Sony) ended badly, causing her to return to the Netherlands without a deal. She began touring the Netherlands in February 2001 (The Anouk Acoustic "AA" Tour).

In March 2001, she released another album, Lost Tracks, which contained acoustic versions and B-sides from older songs, and various duets with K's Choice singer Sarah Bettens and The Anonymous Mis. She was awarded the Popprijs award in 2001 and a Golden Harp in 2003.

In November 2002, the album Graduated Fool was released. This is the heaviest rock album in Anouk's career so far. In addition there was the successful Graduated Fool Tour.

The album Hotel New York (2004) yielded a total of four singles: Girl, Lost, Jerusalem and One Word.
It was one of the most successful albums of Anouk, exceeding sales over 200,000. In addition there was the Hotel New York Tour in Belgium (2 times Sportpaleis, Antwerp) and The Netherlands (4 times Ahoy', Rotterdam) (2005). The Tour resulted in a release on both cd and dvd, Anouk Is Alive (2006), recorded and filmed in the Ahoy', Rotterdam in the Netherlands.

In 2007, Anouk has released her 5th studio album, Who's Your Momma (2007), recorded in the United States. The album was produced by Glen Ballard (also known from the Jagged Little Pill album of Alanis Morissette). It is again a very successful album for Anouk, including the singles Good God, I Don't Wanna Hurt, Modern World and If I Go. Her band members did not like the album. Anouk fired them and started a new band with young musicians she found on YouTube.

In 2008 Anouk did her first show in a dutch stadium ever (Gelredome, Arnhem, March 28 and 29). The press was full of praise. A few weeks afterwards, she announced her divorce from Remon Stotijn [a.k.a. Postman] with whom she is still friends.The reason for their divorce is unknown.

In December 2008 a new blues album will be released. The title of this album is not available yet. Three gigs at The Heineken Music in Amsterdam will be there on December 4, 17 and 22. All of them are sold-out.

Fake It Till We Die

Queen For A Day

Paradise And Back Again

To Get Her Together

For Bitter Or Worse