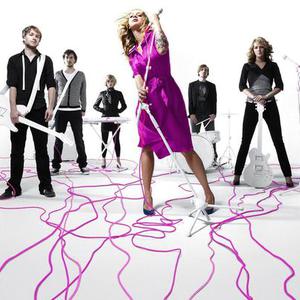 Krezip was a Dutch rock band from Tilburg, Netherlands, formed in 1997 and disbanded in 2009. It is notable for the band members' young ages during their original breakthrough. Since then, the band has had several successful albums and singles in the Benelux. The origin of their name remains unclear, though a popular explanation is that the name is an anagram of "perzik", the Dutch word for "peach."

Krezip began as a four-piece outfit in 1997, in Tilburg, The Netherlands, consisting of Jacqueline Govaert on vocals, Anne Govaert and Annelies Kuijsters on guitar and Joost van Haaren on bass. Though these four formed the core of the band, they found it difficult to get a fitting permanent drummer. During one of their early shows, Thijs Romeijn was in the audience, and was so impressed by the band's energy that he approached them after the show to commend them. During the conversation, it turned out that Romeijn was a drummer himself, and he quickly became the band's permanent drummer.

Throughout 1998, Krezip, armed with two demo tapes, played many festivals throughout the country, such as Festival Mundial, Noorderslag, and Lowlands. Studies and age became a sticking point to accept big offers in the music world. In 1999, they released an independent EP, titled Run Around.

Nothing Less (2000 - 2001)
Reportedly, the band soon received numerous offers from record companies. In 2000, they signed with Warner Music and recorded their debut album, "Nothing Less", with producer Oscar Holleman. Their first single, "Won't Cry", did little to advance their career. The band gained more exposure after a show at Dutch festival Pinkpop, with the ballad "I Would Stay" being received exceptionally well. Accordingly, the song was released as their second single, featuring a video compiled from footage of the Pinkpop show. "I Would Stay" became a #1 hit in Belgium and #2 in the Netherlands. It was the #1 song of 2000 in Belgium.

"Nothing Less" debuted at #1 in both the Netherlands and Belgium, going 3x platinum in the Netherlands (210,000 copies sold with a total of 250,000 albums sold[2]). Despite this, the two other singles from the album, "All Unsaid" and "Everything And More", failed to chart. Among others, Krezip received a 2001 Edison Award (the Dutch equivalent of the Grammy Awards).

The band toured continuously on the album, though towards the end of the tour, problems began to arise. Jacqueline Govaert began to lose her voice, while Annelies Kuijsters experienced severe pains in her hand that stopped her from playing shows without painkillers. After the tour, Govaert needed an operation on her vocal cords, while Kuijsters was diagnosed as simply not being "made" to play guitar. The band decided to go with an unorthodox solution for this problem, and moved her to a keyboard position instead. The empty guitar position was filled by Thomas Holthuis.

Days Like This (2002 - 2003)
Despite a delay due to writer's block, the band released Days Like This, the follow-up to Nothing Less, in 2002. The album was certified gold (35,000 copies) later that year, and though the album was not as successful as its predecessor, the album had several successful singles; "You Can Say" (#18), "Promise" (#16), and "Mine". Despite this success, Jacqueline Govaert has expressed disdain for some of the songs, implying that the album was too serious for Krezip, and critisizing her own singing.

A club tour supported the album through The Netherlands, including unplugged performances in theaters. A performance for The Box program Pure was recorded live and brought out on DVD and CD called "That'll Be Unplugged". The band liked the unplugged shows at first, but over time, decided to keep with rock music. Krezip also spent time promoting the album in Germany. They did two tours through the country and they were the supporting act for Bon Jovi in the Netherlands. They also were the supporting act for Sheryl Crow during her tour through Germany and France.

In 2003, guitarist Thomas Holthuis decided to leave the band to live with his girlfriend in Berlin, citing musical differences. He was replaced by JanPeter Hoekstra.

Release from record label and What Are You Waiting For?
While the band wrote new songs, Warner Music forced Warner Music Benelux to drop all of their national artists, including Krezip. The band independently released "All I'm Asking For", available on their website for 99 cents.

After their departure at Warner, Krezip received many offers from other record labels. After careful deliberation, they chose to sign with Sony BMG. In a speech during the 2004 TMF Awards, Krezip thanked their old label for everything that they had done. The band flew to Los Angeles to collaborate with American producer couple Wizardz of Oz, writing most of their new album there. Drummer Thijs Romeijn became demotivated and found himself unable to play the new songs due to not practising. Eventually, the band decided not to move on with Thijs. The new drummer was Bram van den Berg, who was originally only hired to play on the album, but decided to stay.

In early 2005 Krezip traveled to Ethiopia at the request of charity foundation Novib for an education campaign. The journey was recorded and shown on the Dutch version of MTV. The band also went on tour through Benelux, selling out 15 big venues.

The song "Same Mistake" was used in the Dutch movie Schnitzel Paradise (Het Schnitzelparadijs), which became a huge hit in the Netherlands. The band later noted that, ironically, Same Mistake is the only Krezip song that has never been played live.

In 2006, Jacqueline joined several artists in the Netherlands to record the anthem for the 2006 TMF Awards. The song was performed live during the award show. The single became available for download to support the foundation Dance 4 Life. The song peaked at #4 on downloads alone.

Plug It In (2006 - 2007)
In 2007, the band teamed up with Felix Rodriguez and Jesper Anderberg of The Sounds to record a new album. The band deliberately chose a drastically different sound, with disco influences and more electronica. The album was recorded in two weeks. On May 11, 2007 Krezip released "Plug It In". On February 6, 2007 a Dutch radio station (3FM) played a rough version of the first single, "Plug It In & Turn Me On". The song officially debuted in April 2007 at the #39 spot on the Dutch Top 40. To promote the new album, Krezip has done a promotional tour through the Netherlands.

Ten-year anniversary and break-up (2007 - 2009)
On August 17, 2007 Jacqueline announced on Giel Beelen's radio show that Krezip will give a special concert on December 29, 2007 in the HMH to celebrate their tenth anniversary. A documentary was also filmed, showcasing the band's entire career up until that point with narration by the band members. The band also recorded a cover of "Everybody's Gotta Learn Sometime" by The Korgis. The song was featured in the film "Alles is liefde." Later that year, the band re-released Plug It In with the track, a new song and a number of live tracks from the HMH concert.

The band continued to tour, eventually announcing that a Best Of-compilation would be released in November 2008. It was implied that the band thought this a good point to release a retrospective. On October 2, however, the band announced in Giel Beelen's radio show that they had decided to break up. On the band's Hyves account, they elaborated that now, at their peak, was a good time for them to quit and go their own ways.

Lead singer Jaqueline Govaert has hinted she might be pursuing a solo career in the future.

What Are You Waiting For