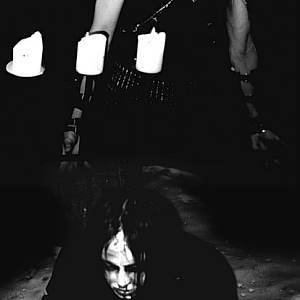 Svartsyn (swedish word for pessimism), are a cult name in the underground of Black Metal. Hailing from Nyn?shamn, Sweden, the band began in 1991 calling themselves Chalice, with Ornias on guitar and Tormentor handling drums and vocals. Tormentor left just before the band cut a split with Illska and changed their name to Svartsyn. Joined by Surth in 1994, Svartsyn once again had a complete lineup and began to work on their first serious tracks.

Joined by Surth in 1994, Svartsyn once again had a complete lineup and began to work on their first serious tracks. Confident in the new lineup and name by February of 1995, they hit the studio. By the end of March the sessions had yielded nine new songs showcasing their evolution. Five were released as the demo ?A Night Created By The Shadows?, with the other 4 tracks remaining unreleased to this day. In 1996, Draugen (of Dark Funeral fame) joined the ranks of Svartsyn and rounded out the roster, enhancing their sound further in the process.

Upon signing a deal with Folter Records the band hit the studio again with their new lineup and brought forth ?The True Legend?. Cited by some fans as a sub-par album, its release was followed by a short tour in 1997 with Behemoth and Desaster - a tour which saw Svartsyn playing shows abroad in Holland and Germany. After finishing the circuit Surth left and was replaced by Kolgrim, which gave them the unique opportunity to re-record the ?Tormentor? 7" and refine their earlier efforts. ?...His Majesty?, was recorded the following year but put on hold before being released as a limited-edition LP in 2000. Thereafter Kolgrim was replaced by M?rk, but this arrangement was to be short-lived and unfortunately gave the band a reputation of being unstable.

In 2003 "Destruction Of Man" was released, and on its heels the legendary "Chaos Svarta Mar / Skinning The Lambs" split with Arckanum was dropped like a bomb on an unsuspecting black metal community. Bonus-editions of earlier recordings such as the entire "Tormentor" EP were included on new CD editions of "Bloodline", making some landmark recordings available in digital format for the very first time, along with quite a few limited edition, digitally-remastered re-releases.

In 2007 news was received of their fifth album, "Timeless Reign". The band have remained characteristically elusive ever since, and fans await the next album with mild trepidation. With a sound described variously by fans and journalists as everything from "majestic", "melancholic", and "haunting" to "cryptic", "blood-curdling" and "bleak", Svartsyn have remained true to their original goals and continue to pound out their own brand of melodic, low-fi black metal as if it were still 1993.

Wrath Upon The Earth