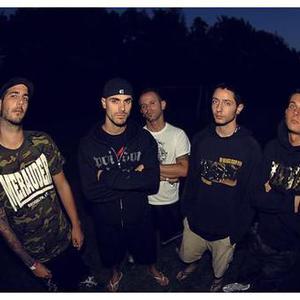 1)Sentence started playing together in 1997 as a project of Hardcore-Metal music in the vein of the biggest and most known bands of that time. After a short time looking for the right members for the first line up, and after a short period of rehearsing, Sentence started playing all over the north east part of Italy and in many of the biggest clubs of the seaside. This is a very good time for the band and the live shows make it stronger and stronger, the audience shows a big interest in Sentence and every gig is intense and hard.

Energy and power, these are the weapons used in every gig, weapons which make every show a big show. After 3 months of intense rehearsing, Sentence recorded 6 songs in a small local studio; the sound quality wasn't superb, but the essence and the power were there! Kids all over Italy appreciated the recordings and the 200 copies printed demo tape called "Another day ends" sold out quickly. In 1999 the line up changed, but the big interest shown for the band pushed them to look for something more professional, so that, without a steady line up, Sentence books a whole week at Fear Studios to record 2 songs to be put on a 7" released on Tomcat Records two months later ? "Perfection through disfunction" represented their first debut in Europe. This time the band works with a professional team, supported by Gabriele Ravaglia and Riccardo Pasini, well known names in the Italian music landscape because of their involvement in big productions. During 2000 Sentence worked hard trying to put together both live gigs and practicing in order to make new songs for a full length CD that will be recorded at Fear Studios. This new master piece "Dominion on evil" is a good mix between metal and Hard core, many labels show interest in it, but the band signs on the Spanish indie label Dark Sun (RIP). Dominion on evil is sold out in few months. During summer of 2000 Enrico enters the Sentence clan on the guitars and with his precious help Sentence tours Europe and concentrates on other new songs, recorded in September 2001. These tracks are included in WAR their new release on Good Life, that came out in October 2002. In the 2003 their first full length called "Dominion on evil" has been re-released through the Japanese label Alliance Trax. Sentence also has recorded a brand new song for a split cd with the metal maniacs Extinguish The Fire from Japan. That split was released through Alliance Trax Records from Japan, after this record follow a Japaned tour with Extinguish The Fire for 5 days. Late 2003 Sentence got some problems with some members so their line up was changed a lot, till they've found the right person. After 2 long years, Sentence has got a strongly line up with a brand new solid drummer (Michele Minganti aka Da Joiner). They started to write new songs in the late 2005 and in the summer of 2006 they will release through the label Burning Season Records from Austria a brand new ep with 5 new powerfull songs. Almost 10 years are gone and Sentence are the last original metalcore band of the 90s left in Italy, they are came back after a long break with a new sound, new line up, but with still their originality that came straight from the late 90s.

2) Sentence is a hardcore bend from Zagreb, Croatia