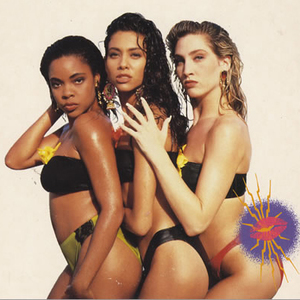 (1) Seduction, an American proto Pop/R&B girl group who had a handful of hits during the late 80s and early 90s. Seduction hailed from New York, and were assembled & produced by Clivilles and Cole of C+C Music Factory, consisting of members Idalis DeLeon (born 15 June 1966), April Harris (born 25 March 1967) and Michelle Visage (born 20 September 1968). Originally intended as a studio project, Seduction's second single ?You're My One and Only (True Love)? featured uncredited lead vocals by Martha Wash.

Originally intended as a studio project, Seduction's second single ?You're My One and Only (True Love)? featured uncredited lead vocals by Martha Wash. The song ended up becoming a hit, and a group was then assembled for the recording of the album Nothing Matters Without Love and subsequent singles. Their biggest hit came in early 1990 with ?Two To Make It Right?, a #2 pop hit. In mid-1990 DeLeon left the group and was replaced by Sinoa Loren (born 6 December 1966). After a pair of hits with this line-up, the group broke up in 1991.

The Two To Make It Right Songfacts says that all four ladies went on to singing and acting careers of some kind. Out of them, Idalis DeLeon went on to the most fame, as both an MTV VJ and Hollywood reporter, and then as an actress of the bit-part/supporting role variety, with a smattering of films and extensive TV appearances including the series The Wayans Bros., Beverly Hills, 90210, and Six Feet Under.

Coming from the surrounding suburbs of the culture heart of Australia, Melbourne, The Seduction are 4 guys making music the way they think it should be.

Taking their influence from bands such as Converge, Every Time I Die, Norma Jean, Cursed and Botch, yet not sounding like any one band, they play noisy, rock 'n' roll influenced Hardcore/Metalcore.

Featuring Ex-In Name and Blood Vocalist Craig Wainwright, things moved pretty quickly for The Seduction, with their Demo "Melbourne" selling out the pressing in a short time, they moved forward and recorded and toured on their Debut LP "Betrayed".

Following a successful tour with Ohio's The Devil Wears Prada a shitload of shows all round the Country and a line up change, The Seduction are ready to take on the touring circuit again with the release of a 7 inch EP called "Black Cranes" (to be mixed by Kurt Ballou @ God City Studios) in the near future.

Two To Make It Right (MCD)

Nothing Matters Without Love