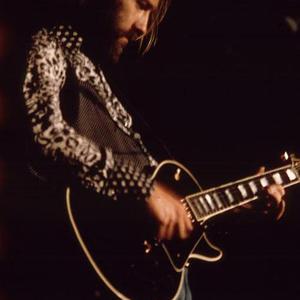 Roy Harper (born 12 June 1941) is an English folk / rock singer-songwriter and guitarist who has been a professional musician since the mid 1960s. He has released a large catalogue of albums as an artist (22 studio albums and 12 live albums) and his influence has been acknowledged by many musicians including Jimmy Page and Robert Plant of Led Zeppelin (who named the song "Hats Off to (Roy) Harper" after him), Pink Floyd (who invited him to sing guest lead vocals on their song "Have a Cigar"), and Ian Anderson of Jethro Tull...

Few survivors from the golden age of British folk-rock have kept their reputations intact. Of the generation of troubadours who came of age in the folk clubs of London in the mid-1960s, some have passed away, others have surrendered to the regurgitation of the blandest form of acoustic folk music. But among the survivors, there is one figure whose body of work, comprising 23 studio LPs and almost as many live and compilation releases, has come to stand for a particularly single-minded form of integrity. That man is Roy Harper.

Now officially ?retired', and living in a secluded corner of Ireland, Harper has recently been hailed as a key influence by a much younger generation of devoted starsailors who instinctively recognise his innovations, his refusal to compromise and his visionary world view. It is rumoured that Joanna Newsom insisted she'd only play her recent UK shows if he would support her. The likes of Fleet Foxes and Jim O'Rourke are avowed fans; and in previous decades he has enjoyed public endorsements and tributes from the likes of Led Zeppelin, Kate Bush, Pink Floyd's Dave Gilmour and many more.

Born in 1941, Harper lost his mother within a few weeks of his birth and was brought up in the outskirts of Manchester by his father and stepmother, a Jehovah's Witness. Harper developed a deep hatred of organised religion and ran away, aged 15, to join the Royal Air Force. The rigid discipline required did not suit him. In order to be discharged early he pleaded insanity and was committed to an institution where he received ECT. A former participant in the skiffle revolution in the mid-50s, around 1964 Harper found himself joining the stream of bohemian rambler-buskers hitching and singing their way around Europe and North Africa. On his return to Britain he pitched in to the London coffee-house folk scene and secured a residence at legendary folk club Les Cousins, where he was spotted by the obscure Strike label.

Beginning with 1966's Sophisticated Beggar, Harper's music has consistently rattled the cage of received ideas. His versatile, poetic sensibility was employed in a wide range of song styles from romantic love songs to late-night mantras to blackly comedic throwaway numbers. A brilliant, percussive guitar stylist in his own right, he extended the form of folk music over the next few years, allowing himself the space to stretch out in long, lyrically dense and mantrically repetitive odysseys of poetic thought. ?I was writing long poems in the 50s,? says Harper, ?none of which unfortunately made it past the first few moves of living quarters. My first inspiration was John Keats's Endymion.?

The first inklings of his expansive approach on record came on the ten minute ?Circle? on 1967's Come Out Fighting Genghis Smith ? produced by Shel Talmy ? and was vastly ramped up on the following year's Folkjokeopus, which contained an 18 minute ?McGoohan's Blues?, named after the lead actor of TV's The Prisoner and whose enigmatic verses were laced with anti-establishment rants.

By this time Harper was a favourite at the outdoor Hyde Park Festivals, where he was exposed to the wider attention of the underground scene. Now produced and managed by Peter Jenner, and signed to EMI's progressive label Harvest, his 1969 LP Flat Baroque And Berserk reflected his reputation as a bloodyminded, truculent troubadour, reflecting turbulent times with anger, wrath and sardonic humour, singing ? like the mistle thrush after which his next opus would be named ? into the eye of the storm.

Stormcock (1971) is generally regarded as a masterpiece: a sprawling but focused suite of four lengthy tracks which explored the inner space of Abbey Road Studio to rhapsodic effect. Like Astral Weeks refracted through the pages of OZ magazine, the songs span an enormous spectrum of experience, from the frontline of social unrest to the secluded, birdsong-infested lanes of the English countryside. Led Zeppelin's Jimmy Page added guitar, disguised as ?S Flavius Mercurius', highlighting a relationship with the group that had begun at the 1970 Bath Festival of Blues and Progressive Music. ?Hats Off To (Roy) Harper?, an incoherent, gutsy blues workout on Led Zeppelin III, paid tribute to the singer's status as a beacon of integrity for the underground scene.

Harper enjoyed a special relationship with Led Zeppelin, and his subsequent albums began to move into harder rock territory with the addition of various key collaborators including, as well as Page, orchestral arranger/keyboardist David Bedford, David Gilmour, Chris Spedding, Bill Bruford and John Paul Jones. Lifemask (1972) contained several songs written for the film Made, directed by John Mackenzie, which starred Harper as an edgy, high-maintenance rock star. Valentine (1974) was launched with a gig featuring Page and Bedford plus Ronnie Lane and Keith Moon. He was invited to sing lead on the single ?Have A Cigar? from Pink Floyd's classic album Wish You Were Here (1975). In the same year Harper released HQ, a rock based album notable for the closing track, ?When An Old Cricketer Leaves The Crease?, an elegiac hymn to unchanging ways and mortality which BBC DJ John Peel insisted should be played in the event of his death.

With the dawn of the 1980s Harper took part in a musical exchange with Kate Bush, who guested on The Unknown Soldier (1980), while Harper returned the favour by appearing on Bush's hit single ?Breathing?. Harper rode the unsteady waves of the music industry during the early 1980s but kept up a productive output that saw his music taking on a prophetic role, expressing more explicit concerns with environmental disaster, religious fundamentalism, urban poverty and the first Gulf War, on releases like Once (1990) and The Dream Society (1998), through to his most recent studio album, The Green Man (2000). In 1994, exhibiting typical desire for autonomy and self-sufficiency, he set up his own record label, Science Friction, to curate and rerelease his entire back catalogue, along with a clutch of CDs of live and unreleased material covering his entire career. In his book, The Passions Of Great Fortune (2003), he published his complete lyrics together with photos, annotations and re-evaluations of every one of his songs.

With a new series of reissues in 2011, Roy Harper's incredible, visionary catalogue of work enters the digital domain in time for his music to take on a new, urgent and timely appeal, in an age in which the hypocrisies and injustices he railed against are more present than ever before. It's been a damned good innings and he's still not out.

I'm Not Gone Yet

The Death Of God