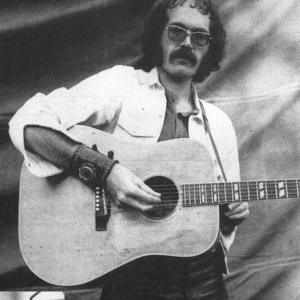 Mike Cooper is a British guitar player, singer and songwriter. Born in 1942 in Reading, Berkshire, UK, Cooper started playing guitar shortly after leaving school in 1958. In 1962, as a singer and harmonica player, he co-founded an R&B band The Blues Committee, with guitarist Paul Manning, guitarist Dicky Reeves and drummer Eddie Page. They played alongside many visiting American blues players in their home town: John Lee Hooker, Jimmy Reed, Howling Wolf and others as well as British r&b and blues bands such as Alexis Korner's Blues Incorporated.

At the same time Cooper was playing and singing folk and country blues as a solo artist in local folk clubs. In 1966, together with singer/guitarist Derek Hall, they recorded their first record, a 7inch four track independent release, titled "Out Of The Shades". The title referred to the coffee house where Cooper and Hall played regularly during that period.

From the mid until the late sixties Cooper was one of the handful of players who pioneered the acoustic British blues Boom, playing with and alongside other British players such as Jo Ann Kelly, Dave Kelly, Tony McPhee and Ian A. Anderson and others, as well as with visiting blues legends such as Son House, Mississippi Fred McDowell and Bukka White. His 1969 l.p. "Oh Really!?" on Pye Records is widely acclaimed as one of the best acoustic blues albums of the period.

1970s
In the early 1970s, working with producer Peter Eden for Pye/Dawn Records, he recorded four solo albums which chronicle, through his own songwriting, a fascinating shift from pure blues through to free jazz. Collaborating with jazz, improvising and avant-garde musicians, in particular South Africans Dudu Pukwana, Harry Miller, Louis Moholo and Mongezi Feza, Zimbabwean composer and arranger Mike Gibbs and British saxophonist Mike Osborne he produced perhaps some of the first and finest rogue folk. For the last of these albums he formed the band Machine Gun Company with Geoff Hawkins on sax, Alan Cook on keyboards, Les Calvert on bass and Tim Richardson on drums. A group that mixed rock, folk and free jazz. Cooper moved to live in Spain briefly before returning to the UK to record a fifth l.p. "Life and Death In Paradise" with Harry Miller, Mike Osbourne and Louise Moholo for Tony Hall's short lived Fresh Air label. He moved to live in Germany, Spain and France shortly after its release. 30 years later these recordings, along with those by Wizz Jones, Roy Harper, The Incredible String Band and Davy Graham have inspired the recent 'New Weird America' or 'free folk' explosion in the U.S., with Thurston Moore and Jim O'Rourke from Sonic Youth and the No-Neck Blues Band confessing to be fans.

Returning to the UK in the late 1970s he began to develop a parallel career and establish himself on the avant-garde and free-improvised music scene, working initially with members of the London Musicians Collective, such as Eddie Pr&eacute;vost, Keith Rowe, David Toop, Steve Beresford, Max Eastley, Paul Burwell, dancer Jo-Anna Pyne, and vocalist Viv Corringham. With saxophonist Lol Coxhill and drummer Roger Turner, they formed The Recedents, a free improvising trio now in its third decade.

1980s and beyond
Through the 1980s, as well as a short spell as rhythm guitarist in G.T. Moore's reggae band The Outsiders, he also played in a number of experimental groups that mixed live free improvisation with dance beats ? The Mayhem Quartet included pianist Pat Thomas, saxophonist Tim Hill and Neil Palmer one of Europe's first turntable artists ? Beating Time with drummer Paul Burwell, Gary Jones on bass and Tim Hill saxophone played punk no wave jazz. He also played Greek Rembetika music mixed with free improvisation in Avant Roots, a duo with longtime friend and singer Viv Corringham. Viv also joined Mike as a member of National Gallery, an acoustic country blues band that included guitarist/singer Mark Makin, and also as part of Mike's Continental Drift band. An electric blues based band that moved into free-jazz and improvised musical areas. It included Mary Geddis, also on vocals, Tim Hill and Geoff Hawkins on saxophones, Pete Beresford and Pat Thomas on keyboards, Gary Jones on bass and Simon Price on drums.

In 1987, together with the extraordinary French slide guitarist Cyril Lefebvre and incorporating the talents of Lol Coxhill, Steve Beresford and Max Eastley, they formed the Uptown Hawaiians to play and record a repertoire of Hawaiian, Exotica and other lap steel guitar musics, re-affirming a life-long passion for Pacific music and cultures, old, new and imagined. They still play together from time to time, often with Paris based Tahitian musicians and dancers and the 'Ukulele Tiki Party'.

In 1994 Mike made his first trip through the Pacific via Tahiti, Fiji and Hawaii to Australia and New Zealand and has returned to tour every year since. This has resulted in a number of musical and artistic collaborations ? Richard Nunns from New Zealand, an improviser who plays traditional Maori instruments; Australian pianist Chris Abrahams (from The Necks) and Tu Fuego (a quartet with the New Zealanders Jeff Henderson on sax, Tom Callwood on bass and Anthony Donaldson on drums); Sydney based New Zealand Film maker Louise Curham and visual artist John Wolseley are among them. It was during the first of these tours in Australia that he began to make Ambient Field Recordings, which now figure as a part of most live concerts these days.

As a journalist Mike has written extensively on Hawaiian slack-key guitar styles and performers and wrote the Hawaii chapter for the Rough Guide to World Music.

Cooper credits the writing and recorded works of ethnomusicologist Steve Feld as a major influence on this latest phase of his music, in particular Feld's work with the Kaluli people in Papua New Guinea and the concept of what they call 'Lift Up Over Sounding'.

Ten years of scoring and performing live music for silent films at festivals around the world has proven a rich and rewarding way of combining a variety of different musical styles and of seducing people into listening to music they might not normally encounter. Initiated by a commission from John McAuslan, director of the Brunswick Music Festival in Melbourne, for a live performance of music for FW Murnau's Tabu in 1995, his program now includes more than a dozen silent classics as well as several more contemporary films such as the 1964 Japanese film Onibaba, his own scratch video 'Stolen Moments' and a body of original super eight films titled 'Those Final Adjustments'.

In 2000 he started HIPSHOT to produce limited edition CD-Rs from his studio The Steelworks in Rome where he currently lives. The first release Kiribati was chosen as one of the best 'Outer Limits' cds of the year by the prestigious UK magazine The Wire and Rayon Hula won an honorary mention at the 2005 Prix Ars Electronica for Digital Music.

Cooper continues to play and sing acoustic music as well as improvising solo and with other musicians and artists.

Light On A Wall (Vinyl)

Places I Know - The Machine Gun Co. With Mike Cooper

Life And Death In Paradise (Vinyl)

Do I Know You (Vinyl)