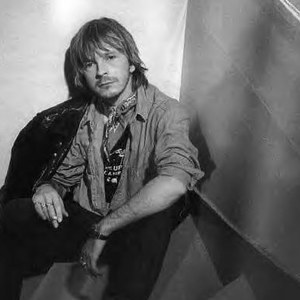 Extremely versatile and respected French singer-songwriter. Active since the 70s, Renaud has written some very controversial songs during his musical career, the most famous one (to British readers at least) praising all women as being better than men except Margaret Thatcher, saying that if he comes back as a dog in his next life, he will use her as a lampost... He is famously recovering from alcoholism with some degree of success.

The most iconic song to many French people, and possibly the song that put him on the map, was the huge French 70's hit "Laisse B?ton" (the story - told with a great deal of humour - of someone who enters a bar and gets mugged for everything he owns, from his leather jacket, to his jeans, his boots, and ends up in an alley without any clothes on).

Renaud 'came back' in 2002 with a huge hit 'Manhattan-Kaboul' (featuring Belgian singer Axelle Red), comparing the lives of a Puerto Rican in NYC to an Afghan girl in Kabul in 2001. This song catapulted his latest album to the top of the charts and earned him various awards in France. His latest album was published in october 2006 and was called "Rouge sang".