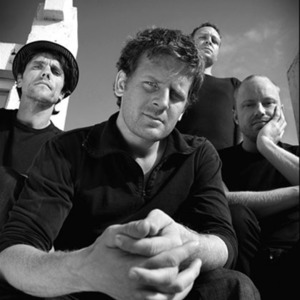 Racoon is a Dutch pop-rock band founded in 1997 in Goes, Zeeland. Bart van der Weide (vocals) and Dennis Huige (guitar) were fed up with the sound of their hardcore rockband Vic'tem and decided to go acoustic. Their first writings resulted in a song called Rapid Eye Movement. For their first release, a demo called "It's an Ice Cream Day", Stefan de Kroon (bass) and Paul Bukkens (drums) completed the band's line-up.

The band made a breakthrough appearance at the 1999 Noorderslagfestival in Groningen, resulting in lots of record deal offers. Contracted by Sony's S.M.A.R.T. label, they released their first album Till Monkeys Fly in January 2000. Produced by Michael Schoots, former Urban Dance Squad drummer, the album hit the charts receiving nationwide airplay. Both the first single Feel Like Flying and the second one, Blue Days, became a 3FM megahit. Their festival appearances on Parkpop and Lowlands confirmed their image as a live-act.

Summer 2001 Here We Go, Stereo! was released as their second full-length record. Widely acclaimed, this record was their ticket to play at the Netherlands's largest festival: Pinkpop.

While working on their third album, Sony ended the record deal. With help from Dutch radio station 3FM and the producer of their first album, they signed a contract with PIAS, to release their 3rd album early 2005. The fresh and mature sound, combined with a more serious approach on songwriting got Another Day a slow start with Happy Family. The second single Love You More hits hard: they claimed 3rd spot on the Dutch Top 40; the album skyrocketed to 6th position in the Album Charts. A succesful club tour during autumn and winter 2005 resulted in the release of their first live DVD called Another Night. And the fans really found their true love back, voting Racoon to be Pinkpop's Gouden Tip ("Viewers Choice") for 2006, claiming a spot on the mainstage.

After this clubtour they decided to fulfill a long-lasting dream for the bands vocalist (Bart van der Weide) and went on a theatertour all across Holland, with the adition of a keyboardplayer (Manu van Os) and a re-write of most of the songs to slim them down a bit. They blew away most fans with the awsome sounding back to basics tour filled with emotions and a new track called [track]Close Your Eyes[/track].

After the theatertour Manu went on to join Di-rect for their theatertour. Currently the band is recording a new album

Look Ahead And See The Distance

All In Good Time