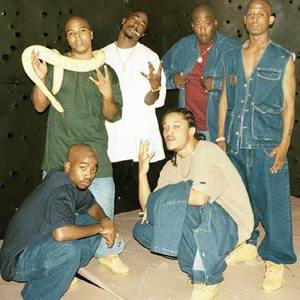 There are at least two bands with this name: (1) a U.S. Rapcrew (2) a Dutch Punkband (1) Katari Cox and Malcolm Greenidge grew up together in New York. They knew each other through Cox's mother and Greenidge's father who were close friends. They and their families later moved to New Jersey where they became friends with Yafeu Fula. Cox's cousin and Fula's Godbrother, Tupac Amaru Shakur, used to look out for them and when he became famous he moved them out of the ghetto and bought them homes in Atlanta, Georgia.

(1)
Katari Cox and Malcolm Greenidge grew up together in New York. They knew each other through Cox's mother and Greenidge's father who were close friends. They and their families later moved to New Jersey where they became friends with Yafeu Fula. Cox's cousin and Fula's Godbrother, Tupac Amaru Shakur, used to look out for them and when he became famous he moved them out of the ghetto and bought them homes in Atlanta, Georgia.

In 1992, Cox, Greenridge and Fula formed a trio. Cox's alias was K-Dog, Greenridge's was Big Malcolm and Fula's was Young Hollywood. The trio went under several names including the Thoro Headz and the Young Thugs. Big Malcolm and K-Dog made their debut on "Flex" on Tupac's "Holler If Ya Hear Me" single which was released on February 4, 1993. In 1994, Young Hollywood's mother and Tupac's aunt, Yassmyn Fula, told Tupac about Mutah Wasin Shabazz Beale, a 16-year-old who witnessed his parents being murdered when he was three or four-years-old. The story made Tupac cry. He decided he wanted to met Beale. They met and soon Beale joined the group. He didn't go under an alias, just his first name, Mutah.

On November 30, Tupac was robbed and shot four times at Quad Recording Studios in New York. The next day he was arrested for sexual abuse. He was found guilty and on February 14, 1995, he was sent to prison to serve up to four and a half years. On April 5, his LP, Me Against The World, was released. The group now known as Dramacydal appeared on two songs, "Me Against The World" and "Outlaw." On June 27, Tupac's "So Many Tears" single was released. It featured "Hard To Imagine," a song by Big Malcolm, K-Dog and Mutah.

When Tupac was serving time he planned to form a new group. He asked Young Hollywood to start searching for members. Of course him, Big Malcolm, K-Dog and Mutah would be members of it, but more were needed. Young Hollywood told Tupac about his friend, Bruce Washington. He said that once when Big Malcolm and K-Dog visited him in Montclair, New Jersey they were robbed of their hats so he went to Washington and asked him to get their hats back. Washington confronted the thieves and they returned their hats. Young Hollywood asked if he could bring Washington with him, Tupac agreed.

Young Hollywood told Washington that he's helping Tupac to search for members for a group they were forming and asked him to be a part of it. Washington didn't believe him and it wasn't brought up again until Yaasmyn Fula mentioned it. At that point he realized that Young Hollywood had been serious. The next day, they visited Tupac. Before he had any chance to introduce himself Tupac asked Washington to drop a few verses. Soon he joined the group. Tupac's brother Mopreme Shakur and Tyruss "Big Syke" Himes of Thug Life joined the group as well.

Now all that was left was to come up with a name for the group. Tupac liked Lil' Homies, but Fatal who was almost as old as Tupac didn't want people to refer to him as a lil' homie, instead he suggested Outlaw Immortalz which Tupac agreed with.. On February 16, 1996, All Eyez On Me was released. The group guest appeared on "When We Ride" and they made solo guest appearances on "All About U," "Tradin' War Stories," "Thug Passion," "Picture Me Rollin'," "Check Out Time," "All Eyez On Me" and "Run Tha Streetz." After the release Komani and Moozaliny left the group for unknown reasons and female rapper Donna "Storm" Hunter joined the group who changed its name from the Outlaw Immortalz to the Outlawz. Outlawz stands for Operating Under Thug Laws As WarriorZ.

On June 14, Tupac's "How Do U Want It" single was released. It featured "Hit 'Em Up" featuring the Outlawz. It's the most notorious dis song in history. Bad Boy Entertainment, Chino XL, Junior M.A.F.I.A. and Mobb Deep is dissed on it. Tupac claimed he had sex with Bad Boy Entertainment recording artist The Notorious B.I.G.'s wife, Faith Evans. The video which was made for the song was the first Tupac video the Outlawz appeared in. Kadafi and Fatal had their friend, Rufus "Young Noble" Cooper, to join the Outlawz.

On September 7, 1996, Tupac was shot four times in a drive-by-shooting in Las Vegas, Nevada. He was taken to University Medical Center where he died a week later. E.D.I. and Kadafi were in the car behind the one Tupac was riding in. E.D.I. said he couldn't identify the murderer, but Kadafi said he might be able to. The police lead was never followed and Kadafi moved with the rest of the Outlawz back to New Jersey before the police could question him. On November 5, Tupac's LP, The Don Killuminati: The 7 Day Theory, was released. The Outlawz guest appeared on four songs, "Bomb First (My Second Reply)," "Hail Mary," "Life Of An Outlaw" and "Just Like Daddy." "Hail Mary" was the third single and video. Death Row Records didn't credit the Outlawz for being on it and they cut them out of the video.

On November 10, after visiting his girlfriend, Kadafi was shot and killed.. He was found by the police in a third floor hallway of an apartment building in Irvington, New Jersey. He was taken to University Hospital where he died on the afternoon. Who killed him remained unknown to the public until September, 2000, when Napoleon revealed in The Source that it was his cousin, Roddy, who killed him. Roddy claimed it was an accident, Napoleon believed him, but not everyone did; Fatal was one of them.

All of the Outlawz with the exception of Fatal moved back to Los Angeles, California. Although Tupac told them serveral times not to sign with Death Row, the Outlawz signed a contract with Death Row Records. Between 1997 and 1999, you didn't hear much from the Outlawz who were obviously wondering where to go from there. They appeared on other artists' albums, compilations and soundtracks. They guest appeared on "Still Ballin' (remix)," the first single and video of Yukmouth's double LP, Thugged Out: The Albulation. In late 1997, Fatal signed a solo contract with Relativity Records who released his debut single, "Everyday," on March 17, 1998 and his debut LP, In The Line Of Fire, on March 31. Former Kausion member Gonzoe joined the group, but left after three months due to beef with the rest of the members.

On December 21, 1999, their debut album, Still I Rise, was finally released. Tupac appeared on 14 out of 15 songs and Fatal was removed from the songs he originally was on due to beef with the rest of the group. The first single and video of the LP was "Baby Don't Cry (Keep Ya Head Up II)." The LP suffered sales because Death Row Records' CEO Marion "Suge" Knight ordered Interscope Records not to promote it because the Outlawz refused to sign with Suge Publishing. It still went double platinum.

On April 1, the Outlawz filed a $4.5 million lawsuit against Suge, Death Row Records, Interscope Records, Suge Knight Films and Suge Publishing claiming breach of contract, unfair business practices, intentional interference with prospective economic advantages, racketeering and others. They won the lawsuit. With Death Row Records behind them, they felt it was time for them to pursue a deal with another major label. But with each offer they got something would go wrong. So they came to the solution where there's nothing else to do, besides starting their own label.

In February, 2000, the Outlawz were on Live From L.A. and stated they were starting their own label, Outlaw Recordz. They signed Noble's step-daughter, Baby Girle, Dirty Bert, Napoleon's little brother, Hellraza, and Lil' D. Then they looked for distribution. Bay area rapper Spice 1 told his distributor, Bayside Entertainment Distribution, about this. They contacted the Outlawz and signed a distribution deal. On November 7, 2000, the Outlawz's second LP and Outlaw Recordz's first release, Ride Wit Us Or Collide Wit Us, was released. It debuted at the ninth position on the Billboard independent album charts and became the best selling independent rap album of 2000. The first and second single and video were "Black Rain" and "Thug With Me."

In 2001, Napoleon made his film debut in Thug Life which also starred The Lady Of Rage and Willie D. New Child from Harlem, New York joined the group. Tupac always wanted someone from New York to be a member of the Outlawz and Fatal felt New Child was exactly what Pac was looking for before his death. On October 23, Big Syke's label, RideOnUm Record Group, released Thug Law Chapter 1, a collaboration album between the Outlawz and Thug Life.

The Outlawz felt Bayside Entertainment Distribution was too small for them. They left and signed a distribution deal with KOCH Records instead. On November 6, their third LP, Novakane, was released. It debuted at the 100th position on the Billboard 200 and third on the Billboard independent album charts. The first single and video was "World Wide" featuring Tupac and T-Low. The LP also featured "Loyalty," a dis directed at Fatal. There had been beef between Fatal and the rest of the Outlawz for a long time, but it wasn't known for the public until we interviewed Fatal in 2001. Fatal said he was angry at them for not being there for Tupac when he was shot and for "forgiving" Roddy for Kadafi's killing, which Fatal may or may not believe was an accident but felt there was no reason to point a gun at Kadafi's head, period. As Fatal said, accident or not, the outcome is the same. Fatal also questioned their judgement because they signed with Death Row Records although Tupac told them not to.

(2)
The Dutch punkband formed in november 1981 and were first named Koi Boys. With Jeroen on bass, Maarten and David on guitars and Barend played the drums, vocals were done by Fokkie. The Outlawz split up in july 11983. Numbers by them may be found on the two albums "Als je Haar maar goed Zit".

We Want In (The Street LP)