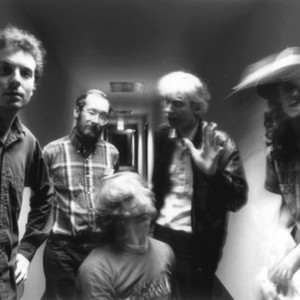 Negativland is an experimental music and sound collage band that originated in the San Francisco Bay Area in 1979. They "lifted their name" from a Neu! song. Long-standing band member Don Joyce produces a weekly interactive radio program, Over the Edge, on listener-supported KPFA in Berkeley. A significant number of Negativland's recent releases have been formed from material the band developed live on the show. The core of the band is Joyce, Mark Hosler, Richard Lyons and David Wills (aka "The Weatherman"). Chris Grigg is a former member. Peter Conheim joined the band in 1997.

Long-standing band member Don Joyce produces a weekly interactive radio program, Over the Edge, on listener-supported KPFA in Berkeley. A significant number of Negativland's recent releases have been formed from material the band developed live on the show.

The core of the band is Joyce, Mark Hosler, Richard Lyons and David Wills (aka "The Weatherman"). Chris Grigg is a former member. Peter Conheim joined the band in 1997.

Negativland has released a number of albums, ranging from pure collage to more musical affairs. These have mostly been released on their own label, Seeland Records. In the late 1980s and early 1990s, they produced several recordings for SST Records, most notably Escape from Noise, Helter Stupid, and U2.

Negativland is well-known for the U2 lawsuit, which nearly destroyed them as a band.

Early history
Negativland started in Concord, California in 1979 around the core founding members of Lyons and Hosler (who were in high school at the time), releasing an eponymous debut in 1980.

A number of releases followed in the early 1980s, but it wasn't until after the release of their breakthrough sample and cut-up sonic barrage Escape from Noise in 1987 that Negativland gained wider attention.

Following the somewhat unexpected success of this album, Negativland faced the prospect of going on a money-losing tour. To prevent this, they put together a phony press release claiming that their song Christianity is Stupid (featuring the sampled and edited voice of an actor repeating "Christianity is stupid! Communism is good!", taken from the propaganda movie If Footmen Tire You, What Will Horses Do?) was an inspiration for a real mass-murder committed by David Brom in Rochester, Minnesota.

The resulting fallout and media frenzy, based on the humorously fabricated claims by Negativland, had the effect of pointing out the venality of the mass media. Though the story was completely unsubstantiated by any facts, the lurid combination of murder, religion, and "rock" music proved too tempting for the media to ignore. The story ran on TV news shows, newspapers, and magazines, with little to no fact-checking. Soon, the world was informed of the "Killer Song" that supposedly led some kid to murder his parents with an ax.

The scandal became the foundation for their next release Helter Stupid, featuring a cover photo of a TV news journalist intoning the fake ax murder story, with the news station's caption "Killer Song" above his head, and a photo of the ax-murderer.

The U2 record incident
Negativland's next project was the infamous U2 record with samples from "America's Top 40" host Casey Kasem. In 1991, Negativland released a single with the title U2 displayed in very large type on the front of the packaging, and "Negativland" in a smaller typeface. An image of the Lockheed U-2 spy plane was also on the single cover.

U2's label, Island Records, sued Negativland claiming that the "U2" violated trademark law and that the song itself violated copyright law. Island Records also contended that the single was an attempt to deliberately confuse U2 fans, then awaiting Achtung Baby.

Funds exhausted, Negativland settled out of court. Most copies of the single were recalled and destroyed. By the mid-1990s, rap had made authorized sampling more common in mainstream music, but the single "U2", for which Negativland did not obtain clearance to use U2 samples, is still illegal to sell in the United States (though available for free download from Negativland's official web site).

In June, 1992, R.U. Sirius, publisher of the magazine Mondo 2000, was asked to interview Dave Evans (aka "The Edge") to promote U2's impending multi-million dollar Zoo TV Tour, which featured found sounds and live sampling from mass media outlets (things for which Negativland had been known for some time). Sirius, unbeknownst to the Edge, decided to have his friends Joyce and Hosler conduct the interview. Fresh from Island's lawsuit, they peppered the Edge with questions regarding his ideas about the use of sampling in U2's new tour and the legality of using copyrighted material without permission.

Midway through the interview, Joyce and Hosler revealed their identities as members of Negativland. An embarrassed the Edge reported that U2 were bothered by the sledgehammer legal approach Island Records took in their lawsuit, and furthermore that much of the legal wrangling took place without U2's knowledge: "By the time we (U2) realized what was going on it was kinda too late, and we actually did approach the record company on your (Negativland's) behalf and said, 'Look, c'mon, this is just, this is very heavy...'" Island Records reported to Negativland that U2 never authorised samples of their material; Evans' response was, "that's complete bollocks, there's like, there's at least six records out there that are direct samples from our stuff."

The "U2" single (along with other related material) was re-released in 2001 on a "bootleg" album entitled These Guys Are From England and Who Gives a Shit on "Seelard Records" (a parody of "Seeland Records"). It is thought likely that Negativland themselves were responsible for the re-release and that U2 gave their blessing. Although Negativland's web site refers to this release as a bootleg, it is available from major retailers and Negativland's own mail-order business.

Negativland are interested in intellectual property rights and argue that their use of U2's and others' material falls under fair use. In 1995, they released a book with accompanying CD called Fair Use about copyright law in general, and the U2 incident in particular. They were the main subjects of Craig Baldwin's documentary "Sonic Outlaws", detailing the use of culture jamming to subvert the messages of more traditional media outlets. Many other artists push the boundaries of copyright law in a similar way, including John Oswald, the Evolution Control Committee, The Bran Flakes, Sir Mildred Pierce, and People Like Us.

Chumbawamba
In 1999, Negativland collaborated with UK anarchist band Chumbawamba to produce the album The ABCs Of Anarchism, largely based around the writings of Alexander Berkman and cut-ups of Tubthumping, Anarchy In The UK and the theme tune to the children's program Teletubbies.

Recent developments
In 2003, members of Negativland contributed their efforts to Creative Commons, an organization devoted to providing artists a broader range of copyright options.

In September 2005, to celebrate the 25th anniversary of the band, Negativland curated an art exhibit in Manhattan's Gigantic Artspace gallery. The exhibit, Negativlandland, included a number of works from and inspired by Negativland recordings, video projection of music videos created by the band and others, and some artwork created specifically for the show, such as an animatronic Abraham Lincoln figure (inspired by the band's Lincoln cut-up piece God Bull) and a hands-on exhibit featuring the Booper, the audio-processing unit that Wills assembled out of old radio parts. The show then appeared in Minneapolis on May 12, 2006, at Creative Electric Studios.

The World Will Decide

It's All In Your Head (Act II)

Deathsentences Of The Polished And Structurally Weak

Over The Edge Vol. 4: Dick Vaughn's Moribund Music Of The 70's

These Guys Are From England And Who Gives A Shit

The Abcs Of Anarchism (With Chumbawamba) (EP)