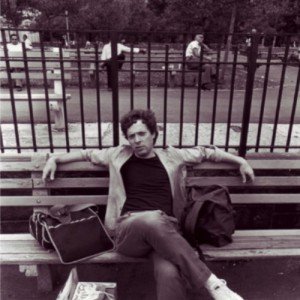 Steinski is Steve Stein, a Hip-Hop producer who achieved notoriety along with Doug DiFranco (Double Dee) in the early 1980's for a series of sample-based collages known as the Lessons, which are still well-regarded today as early underground Hip-Hop classics. Although they never had a hit record, they proved highly influential for subsequent artists such as Coldcut, DJ Shadow, Cut Chemist, The Avalanches, and Girl Talk.

In 1983, Tommy Boy Records held a promotional contest, in which entrants were asked to remix the single Play That Beat, Mr. D.J. by G.L.O.B.E. and Whiz Kid (members of Afrika Bambaataa's Soulsonic Force). By day, Double Dee worked in a professional music studio, while Steinski was a copy supervisor for Doyle Dane Bernbach; although they were older (27 and 32, respectively) and whiter than much of the Hip-Hop scene at the time, they were both Hip-Hop enthusiasts; Steinski, in particular, had been attending downtown rap clubs for years and had an extensive knowledge of Hip-Hop's history.

Their contest entry, 'Lesson 1 ? the Payoff Mix' was packed with sampled appropriations from other records -- not only from early Hip-Hop records and from Funk and Disco records that were popular with Hip-Hop DJs, but with short snippets of older songs by Little Richard and The Supremes, along with vocal samples from sources as diverse as instructional tap-dancing records and Humphrey Bogart films. The jury, which included Afrika Bambaataa, Shep Pettibone, and "Jellybean" Benetiz awarded Lesson 1 the first prize.

Double Dee and Steinski followed up this success with 'Lesson 2 ? The James Brown Mix' in 1984, which began with a sample from The War of the Worlds before quickly running through a montage of memorable breaks from classic James Brown records, with sampled appearances by Dirty Harry and Bugs Bunny.

In 1985 came 'Lesson 3 ? the History of Hip-Hop Mix' which attempted a survey of the great breakdancing favorites, along with snippets from Johnny Carson and Hernando's Hideaway.

Steinski has remained active in recent years, doing occasional remix work and longer old-school mixes (for example 'Nothing to Fear' and various spots on Ninja Tune's Solid Steel radio show) as well as DJ'ing regularly in Europe and the UK using a laptop and MIDI gear.

What Does It All Mean? CD1

What Does It All Mean? CD2