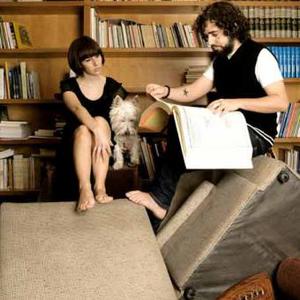 The enigmatic Spanish duo of Fran Gayo and M?nica Vacas paints dreamily abstract pictures of muted joy, pleasant weariness, and melancholy resignation using soft-focus watercolor strokes. Their sound drifts and wavers with once-bright colors now on the edge of darkness, like the end of a sunset. It's ever-so-slightly techno influenced, with minimal sampled beats, but keening sampled strings and wordless drifting female vocals are the predominant musical elements, giving their pieces the poignancy of lullabies, albeit slightly disorienting, vaguely millennial lullabies.

When there are words, they're sung in Asturian, an exotic language spoken in the northwestern part of Spain, making them sound like the incomprehensible fairytales of a lost culture.

Mus, based in Gij?n, Asturias, entered an indefinite hiatus in 2007