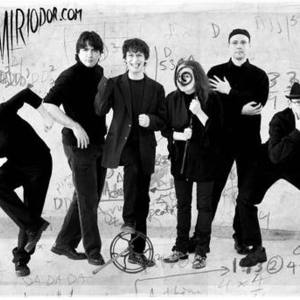 Miriodor, one of the world's most renowned emissaries in the field of what is known as Rock in Opposition (initiated by Henry Cow), combines equal parts jazz, progressive rock and chamber music into a powerful sound that may remind of better known artists like Univers Z?ro or Art Zoyd. Music that is full of fire and eclecticism, but a bit more heavy on the melodic end. Bass player Nicolas Masino came up with this description of Miriodor's music: "rock-oriented post-modern chamber music, with definite humorous overtones."

From Montreal, Miriodor started out as a six piece in the early '80s - their first album Rencontres released independently in 1986 featured flute, clarinet, violins, saxes, bass, guitars, piano, synthesizer and drums, for a very full sound of intense depth. This was followed by their self-titled Miriodor in 1988, Third Warning in 1991, Jongleries ?lastiques in 1996, and Mekano in 2001, featuring some of Miriodor's best-known compositions. Their successful career saw them play at ProgScape and at the Montreal Jazz Fest in 1996, at EdgeFest in 2000, the group was invited twice at the prestigious NEARFest prog festival, in 2002 and a year later for their pre-show. Miriodor headlined at the Gouveia festival in Portugal in 2005. On their latest CD, Parade+Live at NEARFest (2005), famous Swedish musician Lars Hollmer collaborated on a few tracks.