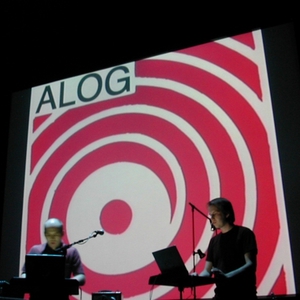 Alog is the brainchild of Espen Sommer Eide and Dag-Are Haugan. One dark and snow-stormy day in the winter of 1997, the band was born in a basement of a Kindergarten in Troms? - a city located in the far north of Norway. This day a string of happy coincidences led them to meet up for a session of tablas and guitar, of which they had no idea would evolve into a creative burst of ideas, involving all kinds of found instruments and collected sounds.

The set of 4-track recordings of these dark-but-warm winter constellations eventually made it onto Alog's debut release on Rune Grammofon, entitled Red Shift Swing . In 2001 they followed up with the critically acclaimed Duck-Rabbit CD.

The Duck-Rabbit is a famous gestalt psychological figure representing both a duck and a rabbit depending upon the point of view. The record showcases Alog's unique combination of genres, often described as "listener friendly" electronica meets avant-garde jazz and contemporary composition. This shifting and switching character is an essential part of the Alog ethos. Even the very word Alog has this shifting quality, never settling into one meaning but playing with the stems of a large collection of interconnected words like analog, digital, dialog, logical, analogy, allegory and so on. Alog promises always to strive for the unexpected and surprising - the unsettling and unnerving quality of sound that escapes any final categorisation.

"A tangle of lines and a mix of musical languages result - it's Techno, minimalism, electronica, post-rock. It's original, it's derivative, it's spontaneous, it's contrived." - Julian Cowley, The Wire Magazine, UK

If one where to choose a word to describe the music of Alog, it would have to be - details . A plethora of miniscule details is carefully arranged so as to inflict the strongest emotional and intellectual impact upon the listener. Like the painting of Ottoman miniatures the construction of new alogic tracks is painstakingly slow, and often involves both extensive travelling in search of the right sounds, and listening through hours upon hours of recorded material for that one second of pure audio bliss. In the alogic studios these tapes are then stitched together - sometimes hiding the joints, sometimes exposing them as open cracks. The use of alogic computer-software developed by the band, is an integral part of this process. With this extreme attention to detail and control, each track takes several months to finish, and a whole album may ferment for years before it is ready for the public. Live shows sample the current stage of this development, giving a glimpse into the creative process often involving violent improvising and playful experiments. Playing live, the group let go their control freakish studiolife nature, and reach for those undefinable moments where music becomes more than mere "music", both for the audience and the musicians.

"At this late hour, when the clich?s of music software have been completely internalized and we're satisfied with marginally fresh reconfigurations of the past, it's an accomplishment to make a record and have your audience wonder exactly what's happening and how it was put together. Each Alog track is its own small world with its own internal logic, and Miniatures collects nine good ones without a single dud. An excellent record." - Pitchforkmedia (US)

The next chapter in the Alog story was the release of Miniatures in January 2005. Critics unanimously applauded this album as their most accomplished and mature album to date. The title alludes to Turkish miniature paintings with their emphasis on details (as described above), and their distorted perspective and sharp radiant colours with a peculiar lack of shadows. The group felt that this in a good way described in visual terms some of the goals of the album. They tried to make the music hit your emotions straight on without any unnecessary detours or intellectual concepts involved.

?It's music that sounds like a group of amnesiacs had awoken from a deep slumber in a room full of old instruments and were slowly, tentatively reacquainting themselves with their possible musical functions. - The Wire (UK)