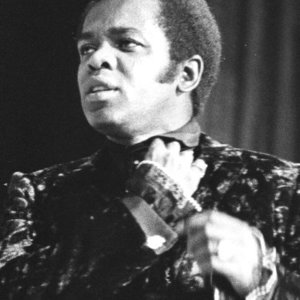 Louis Allen "Lou" Rawls (born in Chicago, Illinois, USA on 1 December 1933 ? 6 January 2006) was an American soul music, jazz, and blues singer. He was known for his smooth vocal style: Frank Sinatra once said that Rawls had "the classiest singing and silkiest chops in the singing game".Rawls released more than 70 albums, sold more than 40 million records, appeared as an actor in motion pictures and on television, and voiced-over many cartoons. He had been called "The Funkiest Man Alive".

Lou Rawls, who learned of gospel music through his grandmother in Chicago, became a successful singer, primarily from the 1950s through the 1980s. He was a high school classmate of music giant Sam Cooke, and they sang together in the Teenage Kings of Harmony, a '50s gospel group.

After graduating from Chicago's Dunbar Vocational High School, he sang briefly with Cooke in the Teenage Kings of Harmony, a local gospel group, and then with the Holy Wonders. In 1951, Rawls replaced Cooke in the Highway QC's after Cooke departed to join The Soul Stirrers in Los Angeles. Rawls was soon recruited by the Chosen Gospel Singers and himself moved to Los Angeles, where he subsequently joined the Pilgrim Travelers

After graduating from Chicago's Dunbar Vocational Career Academy, Rawls enlisted in the U.S. Army as a paratrooper in the 82nd Airborne Division. He left the "All-Americans" three years later as a sergeant, and hooked up with The Pilgrim Travelers as he traveled to Los Angeles. In 1958, while touring the South with the Travelers and Sam Cooke, Rawls was in a serious car crash. Rawls was pronounced dead before arriving at the hospital, where he stayed in a coma for five and a half days. It took him months to regain his memory, and a year to fully recuperate. Rawls considered the event to be life-changing.

Alongside Dick Clark as master of ceremonies, Rawls was recovered enough by 1959 to be able to perform at the Hollywood Bowl. He was signed to Capitol Records in 1962, the same year he sang the soulful background vocals on the Sam Cooke recording of "Bring it on Home to Me." Rawls himself charted with a cover of the song in 1970 (with the title shortened to "Bring It On Home").

Rawls' first Capitol solo release was Stormy Monday (a.k.a. I'd Rather Drink Muddy Water), a jazz album. On August 21, 1966, he opened for The Beatles at Crosley Field in Cincinnati.

Though his 1966 album Live! went gold, Rawls would not have a star-making hit until he made a proper soul album, appropriately named Soulin', later that same year. The album contained his first R&B #1 single, "Love Is a Hurtin' Thing". In 1967 Rawls won his first Grammy Award for Best R&B Vocal Performance, for the single "Dead End Street."

In 1969, the singer was co-host of NBC's summer replacement series for the Dean Martin Show along with Martin's daughter, singer Gail Martin.

After leaving Capitol in 1971, Rawls joined MGM, at which juncture he released his Grammy-winning single "Natural Man." He had a brief stint with Bell Records in 1974, where he recorded a cover of Hall & Oates' "She's Gone." In 1976, Rawls signed with Philadelphia International Records, where he had his greatest album success with the million-selling All Things in Time. The album produced his most successful single, "You'll Never Find Another Love Like Mine", which topped the R&B and Adult Contemporary charts and went to number two on the pop side, becoming Rawls' only certified million-selling single in the process.

Subsequent albums, such as 1977's When You've Heard Lou, You've Heard It All yielded such hit singles as "Lady Love". Other releases in the 1970s included the classic album Sit Down And Talk To Me.

In 1982, Rawls received a star on the Hollywood Walk of Fame.

On the night of September 29, 1977, Rawls performed the national anthem of the United States prior to the Earnie Shavers-Muhammad Ali title fight at Madison Square Garden. He would be requested to sing the anthem many times over the next 28 years, and his final performance of it came on October 23, 2005. The crowd at that performance may not have known that Rawls was extremely ill with cancer, but he reportedly delivered an electrifying performance to kick off Game Two of the 2005 World Series between the Chicago White Sox and Houston Astros.

In 1980, Rawls began the "Lou Rawls Parade of Stars Telethon" which benefits the United Negro College Fund. The annual event, known since 1998 as "An Evening of Stars: A Celebration of Educational Excellence", consists of stories of successful African-American students who have benefited from and/or graduated from one of the many historically black colleges and universities who receive support from the UNCF, along with musical performances from various recording artists in support of the UNCF's and Rawls' efforts. The event has raised over US$200 million in 27 shows for the fund through 2006.

In January 2004, Rawls was honored by the United Negro College Fund for his more than 25 years of charity work with the organization. Instead of hosting and performing as he usually did, Rawls was given the seat of honor and celebrated by his performing colleagues, including Stevie Wonder, The O'Jays, Gerald Levert, Ashanti, and many others. His final television performance occurred during the 2005-2006 edition of the telethon, honoring Stevie Wonder in September 2005, just months before entering the hospital and after having been diagnosed with cancer earlier in the year. This program, aired in January, 2006, contains his final public television performance, where he performed two classics, "You Are the Sunshine of My Life," and a final ode to Frank Sinatra with, "It Was A Very Good Year."

Rawls appeared in a segment of the first season of Sesame Street, to sing the alphabet. He dismissed the concept of using cue cards for the performance, but reversed such decision when he forgot the order of the letters.

Throughout Rawls' singing career, he had the opportunity to appear in many films, television shows, and commercials. He can be seen in such films as Leaving Las Vegas, Blues Brothers 2000, and Angel, Angel, Down We Go. He had a supporting role in the Baywatch spin-off, Baywatch Nights. He also appeared in the western television series, Big Valley, (starring legend Barbara Stanwyck, along with Lee Majors and Linda Evans) where he played a hired hand. Here, he delivered the memorial line: "Ain't a horse that can't be rode; ain't a man that can't be throwed".

Rawls lent his rich baritone voice to many cartoons, including Hey Arnold! as the voice of Harvey The Mailman, Garfield, and The Proud Family. For many of the Film Roman Garfield specials, Rawls would often compose songs for them, which he would then sing usually doing a duet with Desiree Goyette. He also was famously in American sitcom The Fresh Prince of Bel Air.

For many years, he was a spokesperson for the Colonial Penn Life Insurance Company. He was also a spokesman for Budweiser, helping promote the brand on radio and TV to African-American markets much as Ed McMahon did for the white audience. Budweiser was a key sponsor for the Rawls telethon and UNCF.

Rawls was also a regular guest host on "Jazz Central", a program aired on the BET Jazz cable channel.

He appears as "Dr. Rawls" in a dream on an episode My Wife and Kids, where he breaks into a parody version of "You'll Never Find", which a frightened Damon Wayans is afraid of having a colonoscopy the following day. Rawls uses the scope as a microphone in the scene. Rawls appears as a commentator in the second half of the unrated commentary of Anchorman: The Legend of Ron Burgundy.

Rawls was also a guest star during the second season of The Muppet Show. He also made a brief appearance on the series finale of Martin. (The show's character Tommy is excited to see Lou Rawls at Nipsey's and mentioned that his favorite song is "Natural Man." Lou replied that he received a letter from a female claiming that she and her boyfriend broke up because of the song. This eludes to the episode where Tommy and Pam decide to move in together, but winded up fighting and ultimately breaking up because Tommy played the song "Natural Man" so much that it drove Pam crazy.)

The Best Of Lou Rawls (The Capitol Jazz & Blues Sessions)

The Very Best Of Lou Rawls: You'll Never Find Another

I Can't Make It Alone: The Axelrod Years

Nobody But Lou, Lou Rawls And Strings